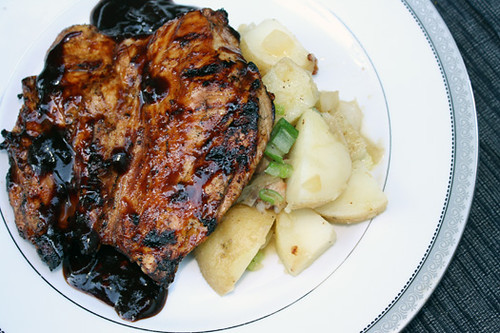 I’ve been really into making sauces, syrups, reductions, and the like lately. Since barbecue chicken is a summertime favorite, I decided to make homemade barbecue sauce. Since I still have a ton of Pom to use up, I went for a sweet and spicy flavor with pomegranate and chipotle. I’m really happy with how this turned out – the sauce was pretty sweet, but the pomegranate also gave it a slightly tart flavor and the finish was spicy. It was just as good as any bottled sauce that I’ve had, without being full of corn syrup and preservatives. It’s also full of antioxidants from the pomegranate.

In order to keep the chicken from drying out of the grill, I butterflied each breast and then pounded them very thin – 1/4-inch or less. This also has the added benefit of making a small piece of chicken appear much larger and seem more satisfying. It doesn’t hurt that it also creates more surface area for the delicious sauce to cover.

My husband requested potato salad with the chicken. Since I don’t like mayonnaise at all, I decided to make a German potato salad. A lot of people like to eat this style of potato salad warm, but I like it best at room temperature of chilled. I remember when I was a kid, my grandma would make the best German potato salad ever and hers was never warm. Since she’s German, I figure its perfectly fine to serve it like she did. I keep the skins on the potatoes to preserve the nutrients, and use just a little bit of bacon for flavor. 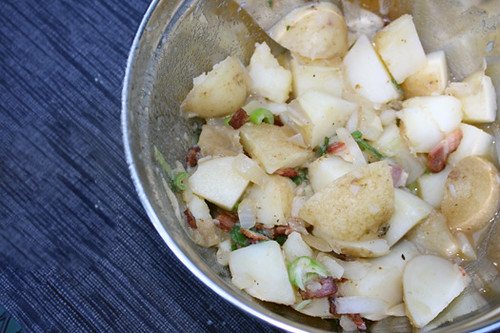 Heat olive oil and garlic in a medium skillet and cook until garlic softens. Add next 7 ingredients (through adobo) and whisk to combine. Bring to a simmer and let reduce for 10-15 minutes, or until it reduces to your desired thickness (I let it reduce by about half). Remove from heat and stir in lemon juice.

This made about 3/4 cup, which was enough to make 4 chicken breasts and have a little left to pass at the table

Bring potatoes and quartered onion to a boil in a large pot. Reduce heat and continue to cook until potato is soft. Drain and discard onion. Set potatoes aside.

Return pot to burner and add bacon. Cook, stirring occasionally, until bacon crisps. Add onion and cook until soft. remove pot from heat and add vinegar, mustard, and oil. Whisk to combine. Return potatoes to pot and toss to combine with dressing. Stir in green onion, and season to taste with salt and pepper. Serve at room temperature or chilled.