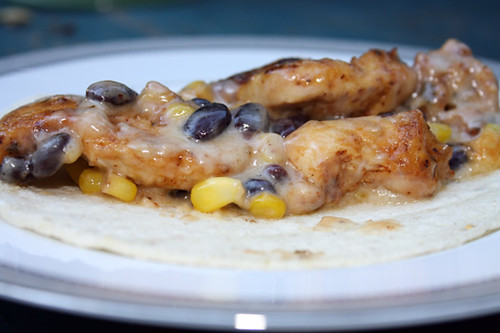 I’m not sure what it is about pollo fundido that so fun. I think it’s the name! Or these cheese. Either way, this is a great dish. This time we went with a Tex-Mex approach, which was a nice change from the more traditional approach to Mexican that we normally take. The beans and corn made this very filling.

I’ve been using a lot more dried beans recently. I find that in addition to having less sodium than canned, the texture is also nicer. Less mealy. I recently discovered that once you cook them, they keep nicely in the freezer… so you can cook up a big batch and then have them ready to go for whenever you need them. Now that you know that, there’s really no excuse to buy canned, is there? The dried beans are even cheaper!

I think this would be a great party dish because the presentation in the pot is awesome – the cheese gets nice and browned and bubbly and it smells awesome. We served this with corn tortillas, but after one we decided it was actually better eaten plain. The tortillas were a little too overpowering. This is also a great dish to play with – it was great as it, but next time I think we might use onions and peppers instead of corn and substitute queso quesadilla for the cheddar. Because that would be traditional and we’re boring like that. 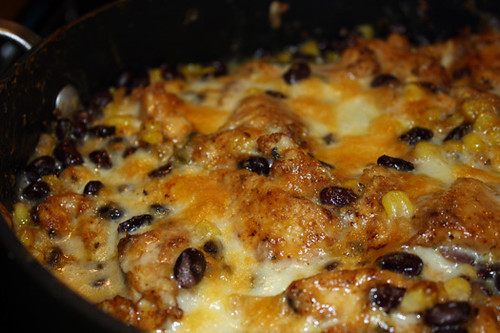 Preheat broiler. Toss the chicken with the chili powder, cumin, salt, and pepper. Dredge the chicken in the flour and shake off any excess.

Melt the butter in a medium oven-proof skillet. Add the chicken and cook about 5 minutes. Add the lime juice, corn, beans, jalapeno, oregano and 1/2 cup water. Cook until chicken is cooked through. Top with cheese. Broil for about 3 minutes, or until cheese starts to bubble and brown. 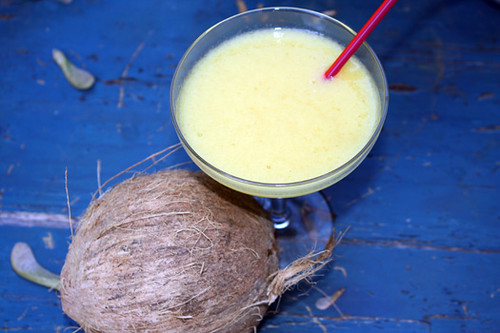 Coconuts were on sale for 99-cents this week and I couldn’t resist. I whipped up some smoothies to go along with our chicken, and they were fabulous! The fresh coconut added a really nice coconut-y flavor with out being too strong or tasting like sunscreen. I put some rum in mine to go with dinner, but if you leave that out these would be a great option for a refreshing breakfast! I hope coconuts are on sale again next week…

Combine all ingredients in a blender until smooth. Serves 4.