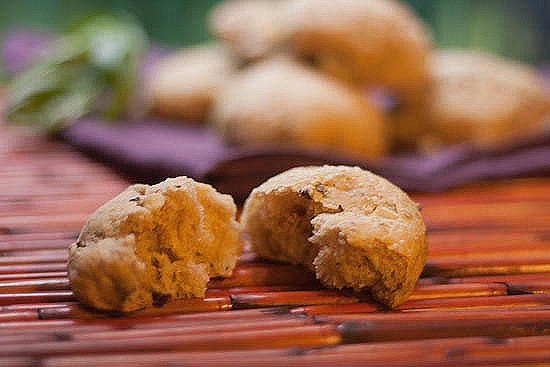 Here in the Capital Region of New York, we were lucky to have been spared most of the wrath of Hurricane Irene. While our friends to the south had to scramble around preparing for the worst, all we really did was make sure that we had batteries for the flashlight. Shawn brought my basil plant inside to protect it from the wind, and I noticed that it was huge! I mean, comically large — practically a basil tree. It was clearly time to make pesto.

Since I knew I would be stuck home in the rain all day, I thought it might be nice to bake. I pulled out my copy of Healthy Breads in Five Minutes a Day, thinking I might find a recipe for garlic knots that I could use the pesto in. As I flipped through the pages, a recipe for 100% whole grain rosemary dinner rolls with a salt crust caught my eye. They weren’t like any other potato roll recipes that I’ve seen, which usually call for mashed potatoes to be worked into the dough. Instead, these called for raw potatoes, which soften as they bake but give the rolls a little bit of texture. I knew I had to try them! 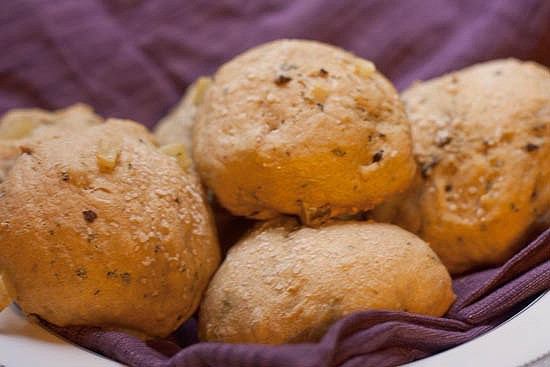 I ended up modifying the recipe quite a bit — both to incorporate the pesto and to use flours that I had on hand (the original recipes called for a mixture of whole wheat, rye, and spelt). I was really happy with how they came out — the crust is nice and crispy and the inside is soft and pillowy. Plus, they couldn’t have been easier to make — they don’t even require kneading! From start to finish they take about 3 hours (but only about 20 minutes of that is active time), which made them the perfect rainy-day project.

These pesto potato rolls were delicious on their own (dipped in a little olive oil), but they were just calling to be served alongside a rich, tomato based soup like my tortelloni fagioli with fire roasted tomatoes. 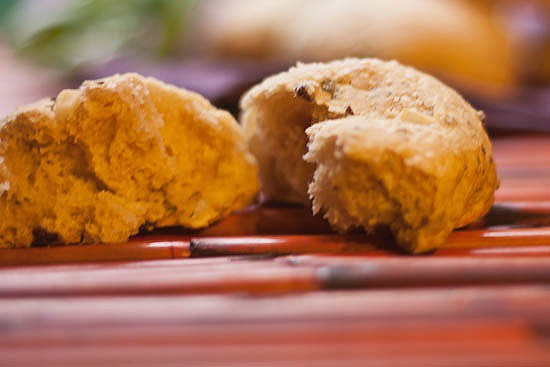