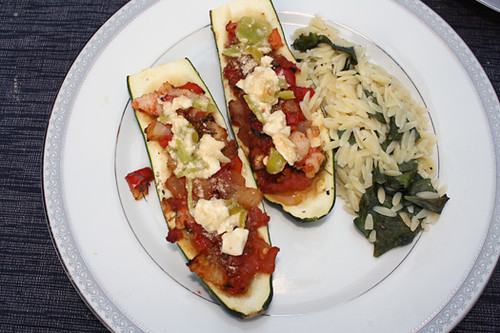 Because of the holiday, laziness, and the brilliant idea of making grilled peanut butter-bacon-maple-banana sandwiches, I didn’t eat very healthily last week. By the time the weekend rolled around and it was time to plan my meals for this week, I was feeling pretty gross and in need of some extra-healthy, fresh meals. This one totally hit the spot.

I was inspired by Ana Sortun’s recipe in the July issue of Food and Wine. I bought this magazine on impulse and it’s amazing – I flagged about half of it! Is it always this great, or was this just a particularly awesome issue? Anyway, the dish was everything I was hoping ti would be – light, flavorful, and loaded with fresh vegetables and herbs.  It was also really filling! I made 6 servings because I was nervous that 1 wouldn’t be satisfying, but I could barely finish my plate. 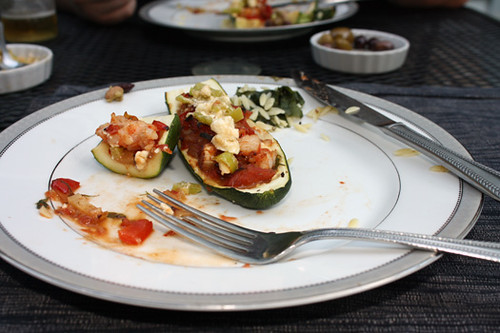 On the side, I served orzo tossed with the juice of half a lemon and some wilted escarole (spinach would have been better, but I didn’t have any) and some marinated olives from mezzeta. I saw these at the store an figured I’d give them a try because I liked their Napa Valley Bistro pasta sauce so much (I tried the second one baked with some stuffed shells and it was amazing! I feel bad giving a lukewarm review to the first one I tried – baking this sauce is the way to go!). The olives are wonderful! Perfect for snacking. It’s a nice mix of green, niçoise, and kalamata olives marinated in Merlot and spices like rosemary and garlic. Yum! 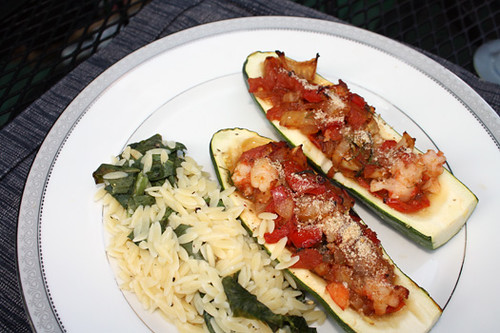 Use a spoon to scoop out the seeds from the zucchini, forming a hollowed out “boat.” Season with salt and pepper and stuff with filling. Bake for 20 minutes. Sprinkle with breadcrumbs and cook another 5 minutes.

While the zucchini bakes, prepare the sauce: Sautee peppers in a skillet (I reused the one from the filling) until softened. Remove skillet from heat and stir in cheese and milk. Continue to stir until milk thickens and a very thick sauce is formed. Transfer to a dish. Serve alongside zucchini.

I am submitting this post to this week’s BSI (Blogger’s Secret Ingredient) hosted by Zoe!