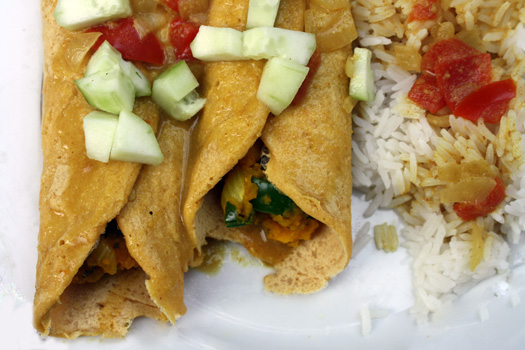 I was very excited to learn that the Daring Cooks challenge for September had an Indian theme! I love Indian food, but I haven’t posted many Indian recipes. I also haven’t eaten it in a while, so it was a nice treat! I had actually never had dosas before, but these were fabulous and I’ll definitely be making them again! It also wasn’t difficult to make – this took me a total of about an hour, most of which was spent on prep. 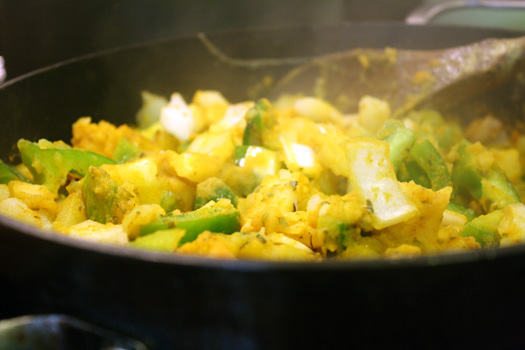 This month’s Daring Cooks challenge was hosted by Debyi from Healthy Vegan Kitchen. She chose the Indian Doasa from the refresh cookbook by Ruth Tal. This month also carried a second challenge – we were allowed to make whatever changes we wanted, but the final dish had to be 100% vegan. I’ve made vegan meals by accident before, but never intentionally and it certainly was a challenge to pass up the butter! I have to say though, I could easily be a vegan if everything tasted this good, because this recipe was downright awesome! 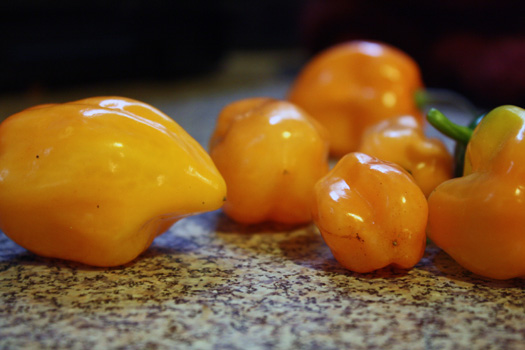 The dish consits of three parts- a pancake that’s sort of similar to a crepe, a curried filling, and  coconut-curry sauce. I did take some liberties in making substitutions – since Shawn has basically told me that he’ll stop loving me if I ever make him eat spelt, I used garbanzo bean flour (which is totally my new favorite ingredient!!). Since i was using garbanzo bean flour, I halved the amount of beans in the filling and added potatoes and peas. Finally, I substituted habenero for chili peppers since I had the brilliant idea of planting 6 habenero plants this summer and now am up to my ears in the things.Despite the habenero, the dish isn’t really hot – the rest of the ingredients balance thing out very nicely.

The sauce is very good served over rice, but the recipe really makes way too much. I have a bout 3 cups left over! Luckily it freezes well. I’m going to use it to poach some chicken or fish, but the sauce recipe could stand to be halved. 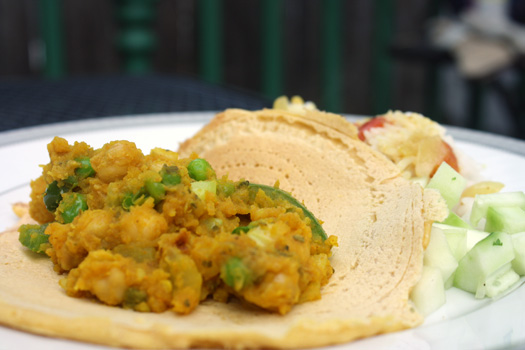 Combine the dry ingredients in a bowl, slowly add the almond milk and water, whisking until smooth.

Heat a nonstick skillet over medium heat. Spray your pan with a thin layer of cooking spray, if needed.

Ladle 2 tablespoons of batter into the center of your pan in a circular motion until it is a thin, round pancake. When bubbles appear on the surface and it no longer looks wet, flip it over and cook for a few seconds. Remove from heat and repeat with remaining batter. Makes 8 pancakes.

Boil the poato until it begins to soften – about 5 minutes.

Heat a large saucepan over medium to low heat. Add the garlic, veggies, and spices, and poato cooking until soft, stirring occasionally. Add the chickpeas and mash slightly with a potato masher. Add the peas and cook until heated through.

Heat a saucepan over medium heat, add the onion and garlic, cooking for 5 minutes, or until soft.

Add the spices, cooking for 1 minute more. Add the flour and cook for 1 additional minute.

Gradually stir in the vegetable broth to prevent lumps. Once the flour has been incorporated, add the coconut milk and tomatoes, stirring occasionally. Let it simmer for half an hour.

To serve: Wrap pancakes around the filling. Spoon sauce over the top. Top with diced cucumber.