You are here: Home / Side Dish / Meat-Free Fridays: Vichyssoise and Spinach and Artichoke Quiche 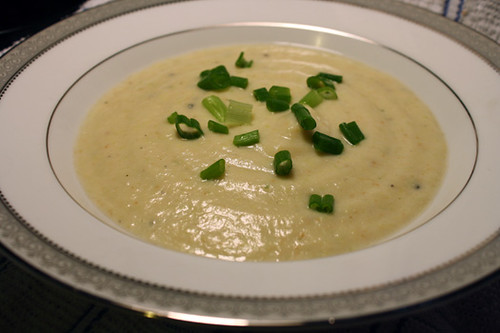 The weather has been really crazy this spring – one days its hot, and the next day its cold and rainy. Since the temperature has a strong effect on what I feel like eating, this makes it pretty hard to plan ahead. I’m just not one of those people that can eat something like salad when its cold out. What’s great about vichyssoise is that although its traditionally served cold, it’s just as wonderful served hot or at room temperature. Perfect for when you don’t know ahead time what the weather will be!

I served this with a spinach and artichoke quiche. I know its meat-free Friday but there is bacon in this recipe. Whatever. Leave it out if you want and it will be just as good. 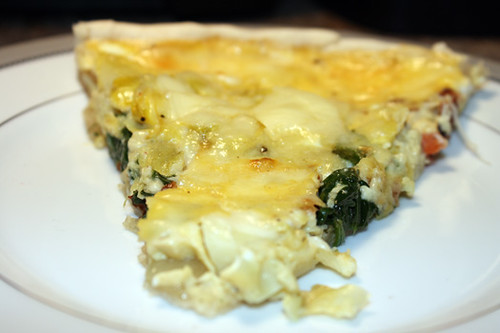 Combine leeks, potato and milk in a saucepan. Let simmer about 15 minutes, or until potato is tender. Remove from heat and stir in cream. Puree using an immersion blender, stand blender, or food processor. Serve immediately, or bring to room temperature or chill.

If using, fry bacon in a medium skillet until crispy. Allow to cool on paper towel, then crumble.

Sweat onion in skillet until translucent.  Add spinach to pan and cook until soft. Remove from heat.

Lay out pie crust in a pie pan or tart pan. Sprinkle bacon, onion, spinach, and artichoke over bottom of crust. Beat together eggs and milk. Pout into pie crust. Top with cheeses. Bake at 350 for about 30 minutes, or until crust is golden and center is set. Allow to cool slightly before slicing.

I am submitting the vichyssoise to the Souper Sunday roundup at Kahakai Kitchen.