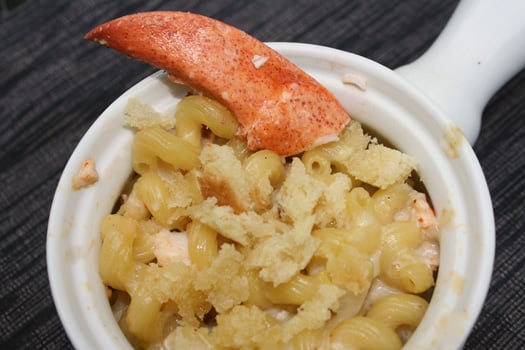 There have been a lot of really good deals on lobster this summer – because of the economy people haven’t been eating as much of it as normal, and since they’ve already been caught, prices are way down. A co-worker of mine just got back from a trip to New Hampshire and he said they were practically giving the stuff away. It’s actually pretty interesting.  Even at rock bottom prices though, lobster is still a little on the pricey side for me to feast on. Which is why this mac and cheese is great – its full of lobster goodness, but one medium lobster will feed about four people. You really can’t beat that!

I used fontina because I like the way it melts and because I didn’t want the cheese to be overpowering – it was a good choice and really let the lobster flavor shine through. It also wasn’t too salty, which is a complaint that I’ve had about similar dished in the past. I’ve seen other recipes that call for swiss or even cheddar though, so you can play around with whatever cheese you like or whatever you happen to have on hand.

Because this is such a rich dish, individual portions are on the small side. I like to serve it in individual ramekins or crocks to counter this. A little bit of lobster mac and cheese on a big plate looks kind of sad, but a whole crock of it all to yourself? Even though its the same amount, it seems so much more satisfying. A simple side salad rounds out the meal nicely – I like one with lots of fresh herbs mixed in and a lemon vinaigrette. 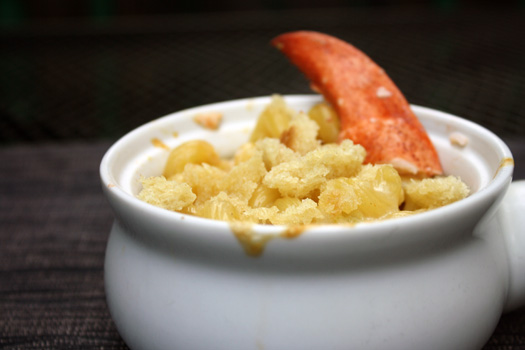 Prepare pasta according to package directions.

Heat oil in a medium skillet. Add leeks and sautee until they begin to soften. Add flour and cook for 1 minute. Deglaze the pan with the wine. Add milk, and cook until it begins to thicken – about 5 minutes. Add the nutmeg and cayenne and cook another minute or two. Stir in fontina and allow to melt. Set aside.

Remove lobster meat from the shell. Set aside a few nice looking pieces to use as garnish, and roughly chop the rest. Stir chopped lobster into the cheese sauce. Fold pasta into the sauce. Season to taste with black pepper.

Spray the insides of 4-6 rammekins or crocks with cooking spray. Fill with lobster and pasta mixture and top with bread. Bake at 350 for 10 minutes, or until bread begins to brown and crisp up.

17 thoughts on “Lobster Mac and Cheese”