This subtly spicy Jamaican sweet potato chowder, loaded with bacon and spices, is ready in under 40 minutes, but it tastes even better the next day! 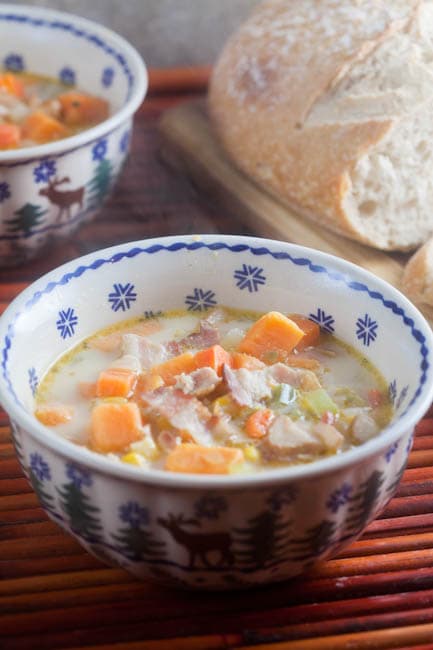 There’s a bakery near my house that has a few soup specials every day. For the most part, there’s never anything that piques my interest but on the occasions that there’s something that sounds interesting to me, they’re always spot on. Unfortunately, I’ve never seen them repeat recipes which can be more than a little disappointing when there’s something you fall in love with. A few weeks ago, Shawn ordered a Jamaican corn chowder that was to die for (and yes, even though he ordered it I claimed half for myself). We immediately began trying to identify all of the ingredients so I could recreate it at home.

The broth was light but creamy and the soup had tons of sweet potato, bacon, and corn and just a little bit of mirepoix. It was simple, but really flavorful and delicious.

I stumbled upon it at the perfect time – I just signed on to be a blog ambassador for Jones Dairy Farm and needed to come up with my first recipe for them. And I really wanted it to involve bacon. I’m really familiar with Jones Farms sausage – their natural pork “little links” are some of our favorites – but before I agreed to work with them I actually had no idea that they also made bacon. Obviously, I couldn’t wait to try it out and this soup was the perfect opportunity! The bacon has a great smokey flavor that made the perfect broth for this chowder and the savory, meaty bits were the perfect contrast to the sweetness of the potatoes and corn. It’s warm and comforting and I know it’ll be perfect later this winter… in fact, I plan to make it again the first time it snows!

And guess what?! They’re giving me two pounds of bacon to give away so one of you has a chance to taste it (and make this soup!), too. Pretty cool, if you ask me! For a chance to win, just leave a comment on this post. I’ll pick a winner on Thursday, November 7. 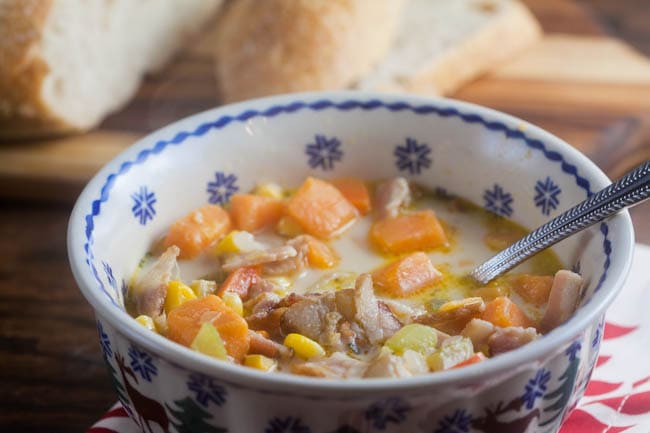 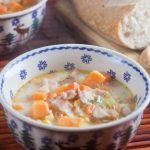 This soup is delicious straight from the pot, but it's even better the next day, once the flavors have had a chance to meld together.
No ratings yet
Print Pin Rate
Prep Time: 10 minutes
Cook Time: 30 minutes
Total Time: 40 minutes
Servings: 6
Author: Lauren Keating
Prevent your screen from going dark