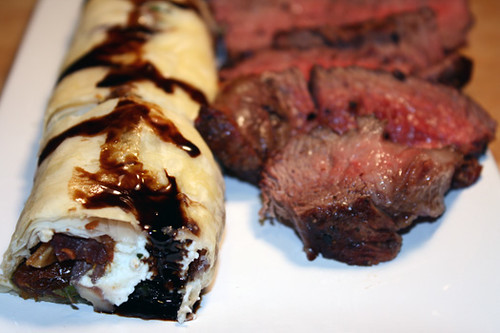 Today’s post is a little different from my normal posts because there really isn’t a clear recipe. It was just something that I there together and threw on the grill this weekend. I also had a really long day at work today and am frankly too tired to think of anything interesting to write about it. Before you read further though, I encourage you to check out the guest post that I did yesterday for the Mushroom Channel. The delicious mushroom strudel seen above is super simple to make and is great as a side dish or appetizer. 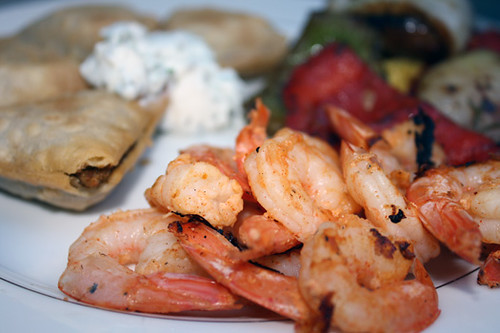 Sometimes when its really hot outside, I lose my appetite. This past weekend was the perfect example of that. In addition, I was really tired and just didn’t feel like cooking. This meal was simple to throw together and was perfect for eating at a leisurely pace outside under the stars. Is it just me, or does food taste better when you eat it outside?

The vegetables were just random – peppers, onions, mushrooms, squash, and cherry tomatoes – tossed with rosemary, olive oil and balsamic and then grilled. They were delicious and definitely stole the show.

The shrimp were briefly marinated in a combination of fat free Greek yogurt, lemon juice, garlic, coriander, cardamom, smoked paprika, and cayenne before being grilled. The marinade was very similar to the one I use on my tandoori chicken (which I just realized I’ve never posted- I’ll have to do that!) and it was good, but i think I prefer it on the chicken.

The samosas were bought frozen, but were surprisingly very good. I served them with a simple dipping sauce made with equal parts fat free cream cheese and fat free sour cream mixed with chives, parsley, and cilantro.