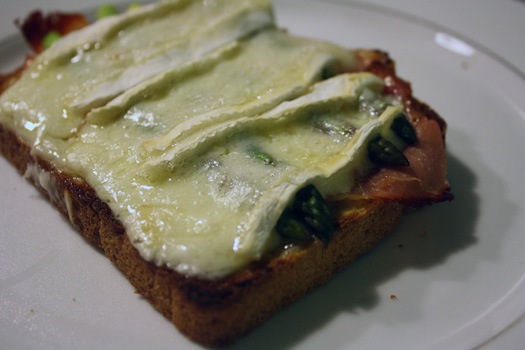 I don’t generally eat a lot of sandwich bread. I don’t know… I think that’s kind of abnormal, since most people consider it a pantry staple and the grocery store devotes an entire aisle to it. But it’s generally just not my thing. I’ll occasionally pick up a loaf for a hot sandwich or for some french toast, but other than that it’s not really something that I think about. I do have to say though – this stuff is pretty good! It’s nice and dense, and the the grains give it a hearty texture. It’s all-natural and doesn’t contain and high-fructose corn syrup, which really sets it apart from most other sandwich bread.

These sandwiches are great for dinner along with a cup of soup. I’ve been making different variations for a few years now, but the general idea is based on a recipe from Rachel Ray’s 365: No Repeats – and the version here is actually a lot closer to the original than I usually make. You can play with the meat and cheese to make the sandwich your own – try cappicola and mozzzarella or prosciutto and gruyere. Toasting the bread first keeps it from getting soggy, and a light cream sauce takes the sandwich up a level.

I find that although the bread will get a little bit soggy, these do keep well and can be reheated nicely under the broiler or in a toaster oven. 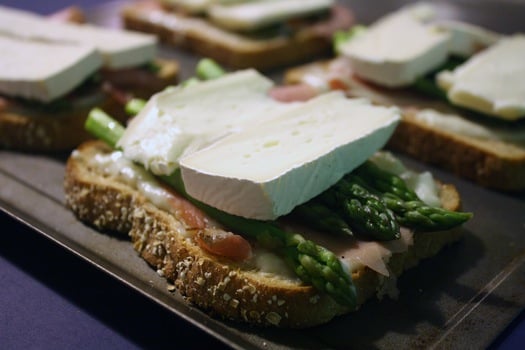 Heat a small pot over medium heat. Melt the butter. Whisk in the flour. Cook for 1 minute to make a light colored roux. Whisk in the milk, mustard, and nutmeg. Bring to a gentle boil, then immediately remove from heat.

Meanwhile, heat the oven to 450. Arrange the bread on a cookie sheet and bake for 10 minutes, or until it is lightly toasted. Spread each slice of bread with a little bit of the white sauce, then top with a slice of prosciutto. Divide the asparagus between the sandwiches. Top each portion with 1 ounce of brie.

Return the cookie sheet to the oven and bake for an additional 5 minutes, or until the brie melts.