I don’t think I’ve ever seen a holiday dinner table that doesn’t include a big bowl of mashed potatoes. They’re a dinnertime staple and they go with just about every entree. Horseradish mashed potatoes topped with crispy shallots is a comforting winter side dish everyone will love. 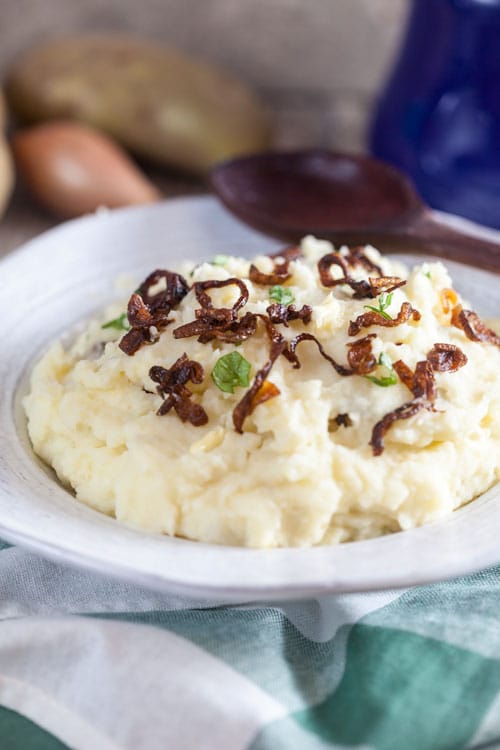 I’m going to let you in on a little secret: For years, I was banned from making mashed potatoes. I was terrible at it, despite being able to cook just about anything else! In the past year or so, I’ve actually gotten pretty good at making potatoes and now I make them on a regular basis.

To make great mashed potatoes, start with Idaho® Russets, which are dry and fluffy (no one wants waxy or gummy mashed potatoes!). Boil them with a few garlic cloves, then mash them with plain Greek yogurt, which adds a little tang and gives them more body than milk or cream, and stir in some freshly grated horseradish for an extra pop of flavor.

Topping these creamy horseradish mashed potatoes with crispy shallots really takes them to the next level. Instead of coating the shallots with flour or batter, I simply cut them into thin rings and cook them in a combination of butter and oil. The butter adds tons of flavor, while the oil reduces the smoke point and helps keep them from burning. Don’t worry, it’s a lot easier than it sounds! Bring them to a simmer, then reduce the heat to low and cook them for about 20 minutes. At first, it won’t look like much is happening, but then the butter will start to sputter and foam and the liquid comes out of the shallots. Then, just when you’re about to give up, the shallots will begin to turn golden brown and crisp up. Use a slotted spoon to transfer them to a plate lined with a paper towel; they’ll continue to darken as they cool and will keep for several days in an airtight container. 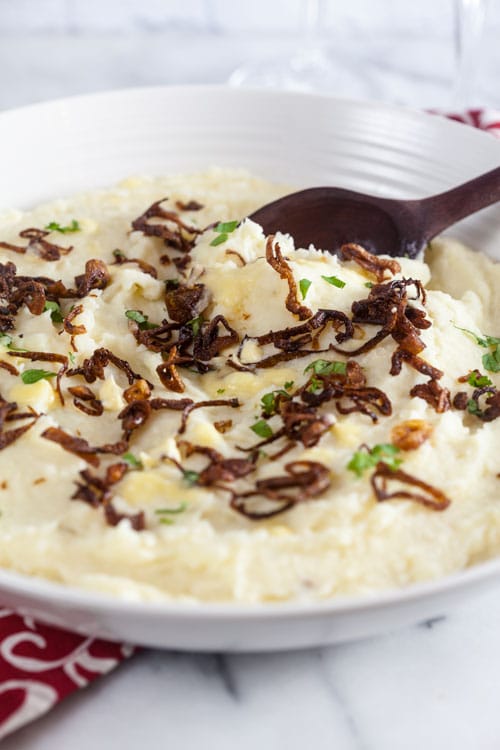 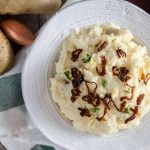 Click for Nutrition Information
I created this recipe for my client, Idaho Potatoes. Thank you for supporting the brands that keep me inspired in the kitchen!
Pin
Share
Tweet
Share
202Shares
By Lauren on December 8th, 2015