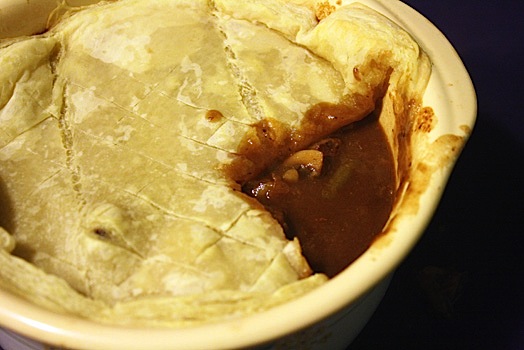 Shepherd’s Pie. Soup, Lasagna, Soup, Stew, Soup, Soup, Soup. That’s been what dinner here has looked like the past few weeks. The colder weather just has me craving comfort foods, most of which are pretty boring and not worth posting about. But this pot pie is another story. For some reason puff pastry comes in packages of two so I had some left after making that baked brie. I’m not normally a pot pie fan, but I remembered seeing a recipe for beef and guinness baked under puff pastry when I was looking at Jamie Oliver’s web site not to long ago, and I liked the general idea. I’m sure his recipe is good, but it looked kind of boring to me so I took mine up a few notches by playing around with the cooking technique and adding lots of vegetables and more seasonings. The result is a stew of tender beef and potatoes swimming in a rich and flavorful broth that has just the slightest bit of bitterness (in a good way!) from the beer, all tucked nicely beneath a buttery crust. It was warm and comforting – exactly what I was looking for on a cold winter day. 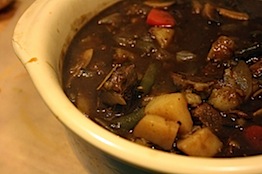 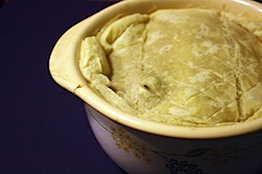 Since my casserole dish is on the small side, the piece of puff pastry was a little more than I needed to for the lid. I trimmed the edges and cut the scraps into pieces that I baked and served along with the pot pit. It was nice to have the extra pastry to sop up the gravy with. I completely forgot to put an egg wash on my pastry, which would have made it brown nicely. I suggest brushing the pastry with a mixture of 1 egg yolk and 2 Tbs water just before baking fo a prettier final product. 🙂

When it came to the vegetables, for the most part I just threw in what I had on hand. It was a great way to use up little bits of things that I had leftover from other meals, but that weren’t enough to make on their own. I would look at the vegetables in this recipe as a guideline – feel free to add whatever you like or whatever you have on hand.

If you want to save on fat and calories, this would also be a delicious stew without the puff pastry – just serve after you add the mushrooms and reduce the gravy! Serving it this way will save you just under 200 calories and 10 grams of fat. You could also just bake up smaller pieces of puff pastry to serve on the side, as seen below. 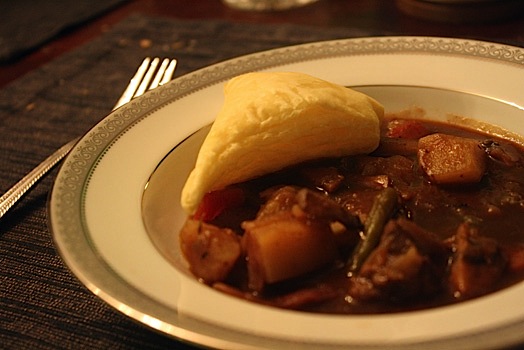 Heat oven to 400.
Pat the beef dry with paper towels. Heat the oil in a dutch oven or large oven proof pot. Add the beef – a few pieces at a time – and allow to brown on all sides. Once all of the beef is browned, return it to the pot. Season with salt and pepper. Toss with flour. Move to the oven and bake for 4 minutes. Stir, and bake for another 4 minutes to allo flour to brown and form a light crust.
Remove and lower the heat to 325.
Add the garlic, Guinness, water, tomato paste, worcestershire, and herbs. Bring to a simmer on top of the stove. Add the vegetables (except mushrooms). Cover, and return to the oven. Bake for 90 minutes, or until the meat can be easily pierced by a fork. Remove from oven.
Heat butter in a small frying pan. When the butter is melted, add the mushrooms and cook until the are just softened. Add to the stew.

If needed, set the pot of the burner (uncovered) and bring to a boil to allow the gravy to reduce. If you have been cooking the stew in a pot, transfer it to a casserole dish. Cover with puff pastry and return to the oven for 20 minutes or until pastry is cooked through.
Serves 6-8
Approx. 555 calories, 28 grams fat, 6.5 grams fiber, 24.2 grams protein