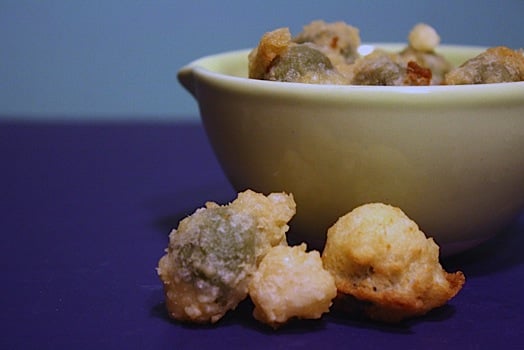 For me, the holiday season is pretty much synonymous with snack-like appetizers. So many of our traditions revolve around them! From holiday cocktail parties, to eating them while we trim the tree, to out annual New Year’s Eve appetizer feast. I’m also not a big stress eater – it makes me lose my appetite! December and January can be pretty hectic times for me at work, and I’ll often want to snack on appetizers rather than eat a full meal. The problem with appetizers is that unless you buy heat and eat ones (which get expensive fast!), they can be very time consuming to make. Which is why when my friends over at Mezzetta suggested I post ideas for having an “instant party” featuring fast and easy recipe ideas, I jumped on it.

With these ideas, you can have an elegant holiday spread served up in mere minutes. Aside from it all being delicious and fabulous, the best part is that the recipes are all made with ingredients that you likely keep on hand. I was sent some samples of olives, sun dried tomatoes, and artichoke hearts to use but everything else came from my cabinets and fridge – no special trip to the grocery store was made in preparation of this post. (And if you’re anything like me, olives, sun dried tomatoes, and artichoke hearts are kitchen staples that you would never be without anyway! I highly recommend the Mezzetta brand – they’ve been the only olives we’ll eat for a while, and I’ll definitely be buying the tomatoes and artichokes now too.) 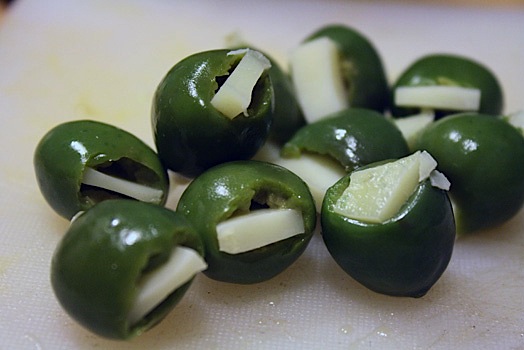 First up, we have some Asiago-Stuffed Fried Olives! I had something similar to these when I was in Bermuda, and have been dying to recreate them ever since. There’s something about the combination of meaty olive, gooey cheese, and crispy beer batter that is simply irresistible. These do take the longest to make of all today’s recipes, so you’ll want to get started on them first.

Remove the pits from some good-quality olives, such as castelveltrano. Stuff each olive with a small piece of asiago cheese. Toss in some flour to lightly coat.

Heat about 2 inches of oil in a deep pot. When the oil is heated, fry the oil in batches for about 45 seconds or until batter has crisped and turned golden. Remove from oil and cool on paper towels. 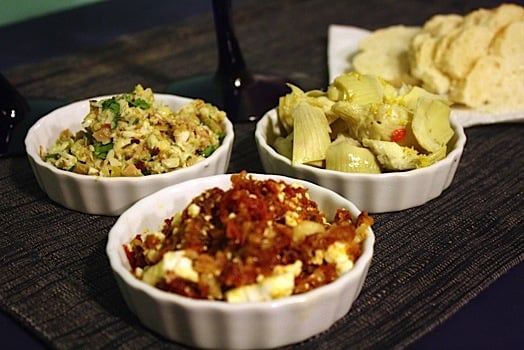 Next up is a crostini bar with two types of tapenade and some seasoned artichoke hearts. These are all super simple to make, and taste much more complex than they are. The first is artichoke and green olive tapenade. Basically just throw some artichoke hearts and some garlic-stuffed olives in the food processor along with some parsley and a few olives almonds. Pulse a few times to chop it all up, then drizzle in some olive oil and process until it comes together. I have to say that I wasn’t a huge fan of the garlic olives on their own – they were just too strong! – but mixed up in the tapenade, they were fabulous.

Next we have a sun dried tomato and feta tapenade. Just as super simple to make as the first – just blend some sun dried tomatoes in the food processor along with a little bit of onion and 1 clove garlic. Then gently mix in some crumbled feta cheese and season with a touch of cracked black pepper.

These tapenades were both amazing. We couldn’t decide which we liked better!

To round out the selection, serve up some Lemony Artichoke Hearts. Gently combine a jar of artichoke hearts with some parmesan cheese, a little lemon juice, some lemon zest, and salt and pepper. So simple, but so delicious! I really enjoyed the way the lemon make the flavor of the artichokes pop. The flavor is very delicate and refreshing and is a nic way to balance the heavier flavors of the tapenade. 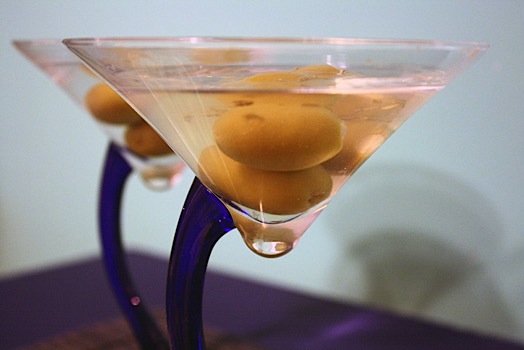 Last but not least, what would ap arty be without drinks? I have to thank Mezzatta from the bottom of my heart for introducing me to this Rosemary Martini with Blue Cheese Olives – it’s hands-down my new favorite. When it comes to liquor, I’m usually a gin and tonic girl. But this martini has been my go-to drink recently. I LOVE the way the rosemary brings out the juniper flavor of the gin.

I also need to take a minute to gush about these blue cheese stuffed olives. I. LOVE. THESE! And I’m super bummed because they won’t be available on the East Coast until next summer (hint, hint West Coast friends… send me some more!). The first time I had blue cheese stuffed olives was a few years ago in a martini at the Cheesecake Factory. I’ve always wanted to have them at home, but have never been able to find good ones. I was getting really tired of spending money on jars that were too salty, or had nasty cheese that was too hard, not blue enough, or just tasted downright funky. But these are pretty much perfection. The olives taste fresh and not too briney, and the cheese is soft and sharp like blue cheese should be. I can’t recommend them highly enough.

So… for the martinis: combine 1 part gin (vodka if you must) with 1/2 part dry vermouth and about 1 teaspoon olive juice in a shaker with a few ice cubes. Rub a few dried rosemary springs between your fingers to release the flavors, then add them to the shaker. Shake and strain into a martini glass. Serve with three blue cheese stuff olives. 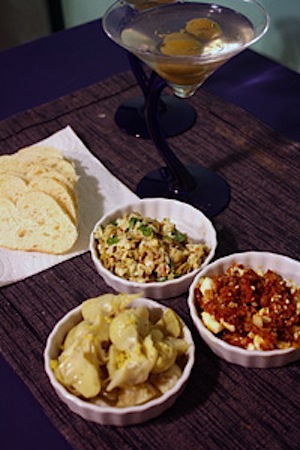 Obligatory FTC Disclaimer: Mezzetta provided me with samples of all above mentioned olives as well as with sun dried tomatoes and artichoke hearts. In addition, they provided the recipe for the martini, and several crostini recipes that I used as inspiration for my crostini bar.