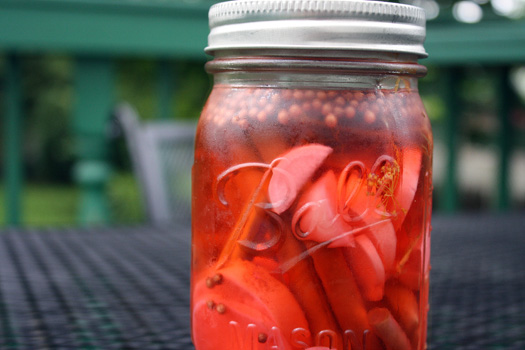 Lately the amount of food that I end up throwing out has been annoying me. I get tired of foods really quickly, so I don’t generally like to have the same vegetable multiple times in one week. Since a lot of vegetables are sold in bunches or packages, I end up with way more than I need. I recently got a huge bag of green beans at the farmer’s market and I knew that I would never be able to eat them all before they went bad so I turned half of them into pickles. I also threw in some radishes that were starting to get shriveled.

The color from the radish skins seeped into the brine, which gave it a  strangely cool pink hue, but I really like the way these turned out – the green beans stayed really crispy and have more “snap” to them than any cucumber pickles that I’ve had. I couldn’t decide if I wanted more traditional dill pickles or if I wanted garlic, and I eventually decided to just mix to two. I also threw in some coriander seeds for additional spice. The combination of flavors is great – I think it’s really the best of both worlds. 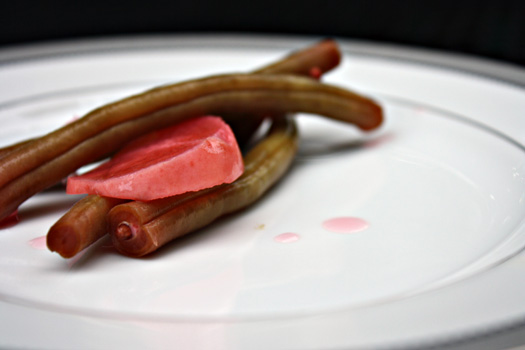 These pickles were really simple to make, and are a great way to use up any vegetables that you might not eat otherwise. They only take about 10 minutes to prep, and they’re ready to eat after one night in the refrigerator. They’re delicious on their own as a quick snack, on a salad or sandwich, or anywhere that you might enjoy a more traditional pickle. They also make great gifts. 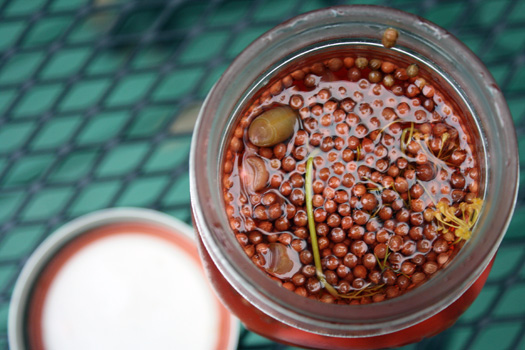 Bring a large pot of water to a boil. Blanch green beans 1 minute. Drain and allow to cool.

Divide green beans and radishes between 2 jars – you can pack the jars pretty full but make sure you allow some room for brine.

Combine vinegar and salt in a seperate container. Stir so salt begins to dissolve. Pour this mixture over vegetables into each jar, filling halfway. Add garlic, dill, and coriander to jars, then add enough water to fill them and completely submerge the vegetables. Seal tightly and give them a good shake. Refrigerate overnight.