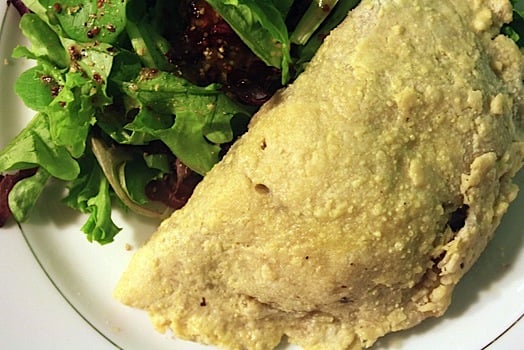 Daring cooks make me do it. I know that it was only yesterday that I was complaining about eating to many fried, cheesy, en croute type dishes. But somehow, I totally forgot about this month’s Daring Cooks! They made me do it! I don’t know what happened, but for some reason I had the reveal date marked on my calendar as today, so I’m a day late. But I started making this wellington over the weekend and was planning to have it last night for dinner anyway so, for the most part it, worked out ok.

The 2009 Daring Cooks challenge was hosted by Simone of Junglefrog Cooking. Simone chose Salmon en Croute (or alternate recipes for Beef Wellington or Vegetable en Croute) from Good Food Online. When I first read what the challenge was going to be, I was really excited. I was all set to make Lamb Wellington – something I’ve been dying to make ever since they kept making it that one season on Hell’s Kitchen. But when the time came, I just wasn’t feeling it. You see… in addition to being sick of fried, greasy foods we’re also sick of meat. I know! Crazy right? We’ve actually eaten very little meat in the past few months and we’re not really missing it. Once a week or so seems like the perfect amount. So I thought of what else I could fill these with, and finally settles on mushrooms and blue cheese. Which was AWESOME. The flavors were simple, but so so so good.

This was definitely the most challenging Daring Cooks recipe that I’ve made yet, and my pastry was almost a total failure. Even after adding almost double the water that the recipe alled for, my dough just wasn’t coming together. It still looked like flour! I considered tossing it and defrosting some puff pastry, but threw it in the fridge and hoped for the best. I don’t know what I thought the fridge was going to do for it, but it didn’t do much! I was able to roll out just enough dough to make two individual sized pockets. The crust also didn’t brown the way that I thought it would. Not sure what I did wrong.

The dough (if you can call it that!) may have looked ugly and most of it got thrown out, but the flavor was fantastic! For the filling, I cut two large portobellos into a medium dice. I three them into a hot pan with a little bit of oil and about 1 Tbs sage, and cooked them down until they became very soft. I removed them from the pan and let them drain on some paper towels to take out some of the moisture while I rolled out my pastry, then filled each pastry with half the mushrooms and about 1 ounce of crumbled roquefort. A quick egg wash and 20 minutes in the oven, and dinner was ready! The house smelled amazing while these baked and these cheese got all melty inside of the pastry like I was hoping it would do. I guess I would say that these were almost a success. The flavors were definitely there, it was just a matter of figuring out where I went wrong with the pastry. I’ll definitely be trying this one again.

(To keep dinner from being too heavy, I served these with mixed greens dressed in a simple dressing of mustard, apricot preserves, white balsamic, olive oil, and cracked pepper – one of my favorite quick dressings.)

Since my version didn’t come out great, I’m not going to post the recipe here. But you can find the original recipes on Simone’s blog here. 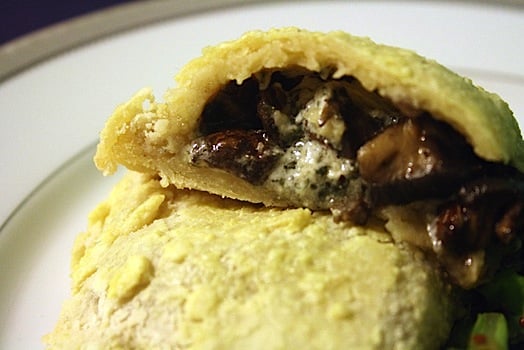 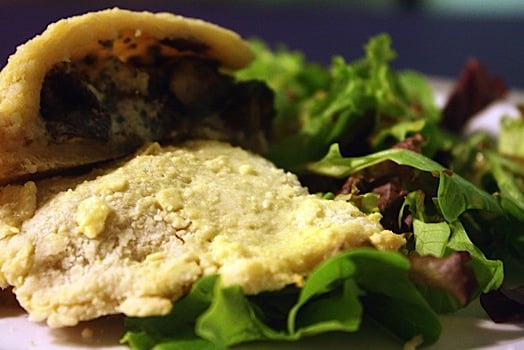