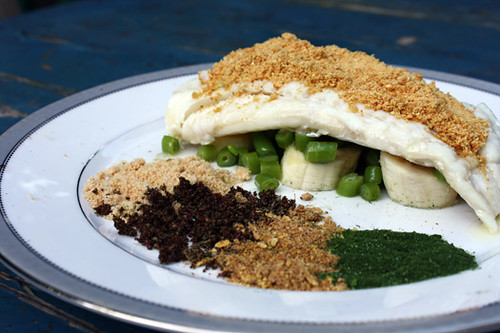 It figures that Daring Cooks and Foodie Fights would both require me to post on the same day. Oh well, double dose of Healthy Delicious today!! This was my first month participating in Daring Cooks, so I didn’t want to be late.

This month’s challenge was hosted by Sketchy from Sketchy’s Kitchen and he picked “Skate, traditional flavors powdered” from the Alinea cookbook. I was really excited by this challenge for two reasons: First, I am a huge fan of the blog Alinea at Home and have been dying for a reason to try one of these insane recipes. Second, molecular gastronomy is SO different from the way that I normally cook. I’m all about fresh ingredients, limiting processed foods, and keeping things simple. This recipe had me take a huge amount of fresh ingredients, process them down to a few plates full, and basically over-complicate everything. But it was worth it because this was insanely good. I had the hugest smile on my face while I ate it. Just looking at the pictures is making my mouth water at the memory, and even though it took an entire day in the kitchen, I’m ready to do it again. Actually I expect that it will take less time now that I know what I’m doing. I’ve already reused one of the powdering techniques for another project, and it was a lot easier the second time around.

This is what I started with. Doesn’t look like it goes together, does it? I promise you that it does! 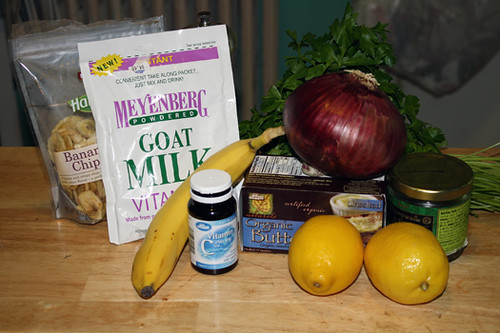 I made a few changes to the original recipe: I used cod because it was on sale and I have no idea where to find skate. I used powdered goat milk because I found a small, cheap package of it and I could only find huge packages of regular powdered milk. I cut the buerre monte, green beans, and fish portions by 1/4 since there were only two of us. Also I made a toasted coconut powder that was awesome.

Thoughts: The onion-caper powder wasn’t our favorite, but I was having trouble drying those in the microwave. When I do this again, I’ll try drying everything in the oven and see if that makes a difference. The dried milk and banana powder makes way more than you need. I’ll cut that by half next time.

And a lesson: don’t forget the salt!! I forgot to salt the beans and fish and for the first half of dinner I was very disappointed, thinking it was just “ok” and not worth all the work. Then I realized I forgot the salt and added some. It opened the flavors up a ton and totally transformed everything. I had actually given the rest of my fish to my husband before this revelation, and I literally took it back off his plate and ate the rest of my dinner with a HUGE smile on my face.

I can’t wait to see what next month’s challenge brings! 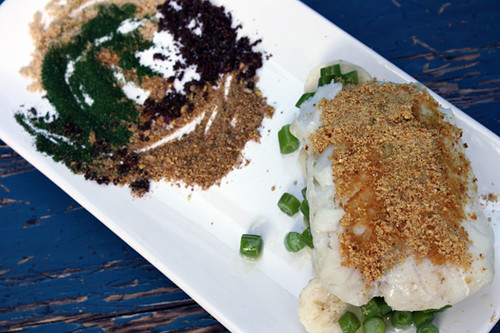 Bring 100g water, 100g beurre monte, and green bean rounds to a boil over high heat. Cook until the water has evaporated (about 3 minutes), when the pan is almost dry, remove it from heat and season with 3g salt

Bring 300g water and 300g beurre monte to simmer over medium heat, add cod and simmer for 2 minutes. Remove the pan from heat and flip the filets over and let rest in pan for two more minutes. Season with 5 grams of fine sea salt.

To plate, arrange banana slices on a dish. Cover with green beans rounds, and top with cod. Serve with powders, below.

In a small saucepan, bring the water to a boil, remove from heat and whisk in the butter 1 cube at a time. This should from an emulsion. Keep this heated, but under 195 degrees. The emulsion will not break – this is your poaching liquid.

Poach zest in the simple syrup three times. Dry with paper towels. Microwave for 8-10 minutes at medium power, until dry. Pulse in a coffee grinder and mix with vitamin C powder.

Blanch the parsley in boiling saltwater for 1 second, submerge the leaves in ice water for 3 minutes. Dry on paper towels. Combine with cilantro. Microwave in 30 second intervals until dry. Grind.

Microwave at medium power for 20 minutes. Pulse in grinder.

Run the capers under cold water for two minutes to remove some of the brine.
Dry on paper towels. Microwave at medium power in 30 second intervals until dried. Grind. Mix with onion powder.

Preheat the oven to 350. Sift the cream powder into a fine layer on a silpat or on parchment. Bake for 4 minutes (watch carefully!!!), then remove for heat. Grind the banana chips  and mix with the toasted milk powder.

Preheat oven to 350. Place coconut on a baking sheet in a thin layer. Bake for 5-7 minutes or until it begins to brown. Grind.