As I dropped the spoon back into the pot, a huge smile spread across my face. I’ve been dreaming about curried butternut squash soup for a while and I had a hunch that it would be good, but I had no idea it would be that good. It’s definitely a soup I’ll make over and over again – and I can’t wait to eat the leftovers for lunch all week! 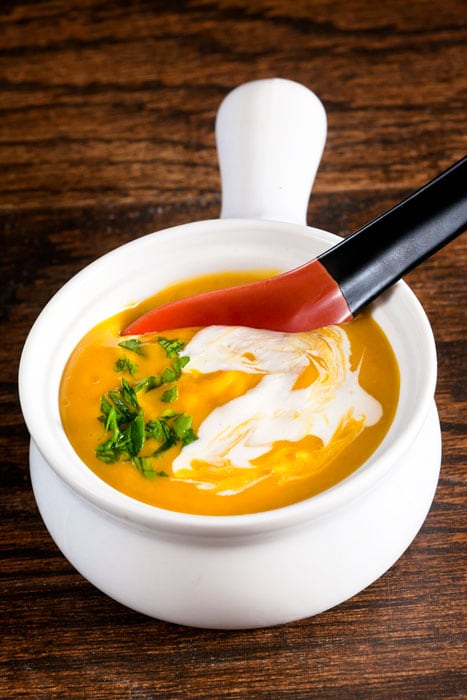 I just posted a tofu curry pot pie recipe last week and I know that curry isn’t for everyone, but I can’t help it – I’m on a major curry kick lately. This recipe couldn’t be any more different from las week’s though: In this bisque, the curry takes back seat to the other flavors and adds a touch of mystery and a subtle heat that builds as you eat. It doesn’t taste like “curry” at all and I’d be willing to bet that most people wouldn’t be able to identify the flavor if they didn’t already know what it was.

This butternut squash soup is silky smooth and unbelievably creamy, despite the fact that there’s no cream (or any dairy) in it whatsoever. I don’t now how, but it tastes like it’s full of butter. While we were eating, Shawn said it reminded him of the lobster curry soup on the Indonesian tasting menu at Yono’s, and he was absolutely right. I had forgotten all about it, even though it was the best soup I’ve eaten in my entire life. This curried butternut soup is a very close second. 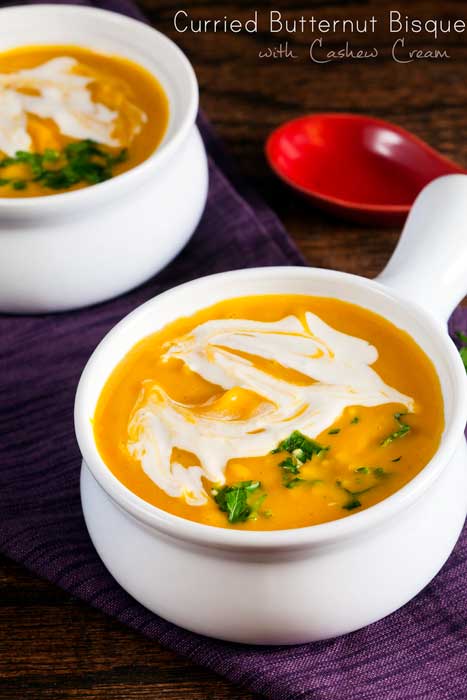 This recipe takes just about an hour to make, but it’s almost all passive time that you don’t actually have to be in the kitchen for.

Roasting the squash brings a ton of depth to it’s flavor, but I’ll admit that the real reason I did it was that I was being lazy. I HATE cutting winter squash. It’s s0 hard, and I’m always afraid that I’m going to break my knife. Roasting means I  only have to make one easy cut down the center. After it bakes, it’ll slip out of it’s skin so easily that you can do it with your hands.

Roasting the squash also gives you time to soak the cashews for the amazing cashew cream that I drizzled over of the soup (it’s based on this cashew cream recipe from With Food + Love). Even though the soup is great without it, you definitely don’t want to skip out on the cream – it really takes it to the next level! 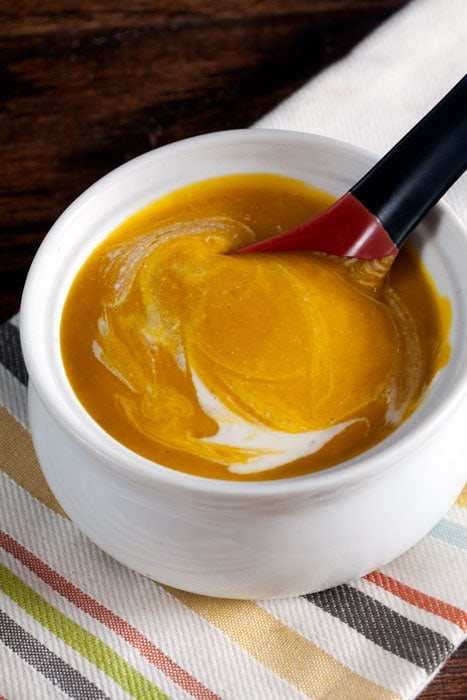 For the Cashew Cream

For the Cashew Cream