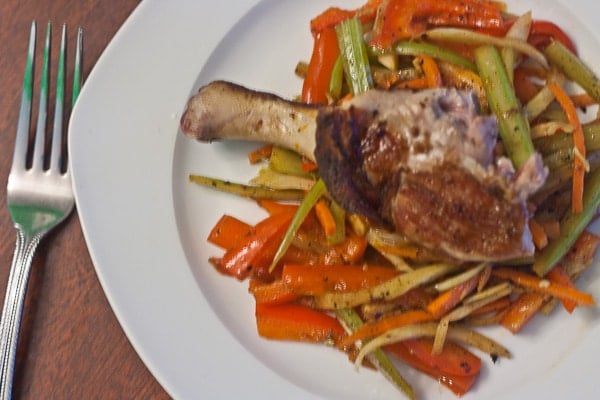 Duck has a little bit of a bad reputation. People think it’s fatty, greasy, and finicky to cook. With a little know-how and understanding of the cooking process though, it’s a great protein choice with tons of flavor. And – according to the self nutrition database – it only has about 2 calories more per ounce than chicken!

This recipe is adapted from one of my favorite cookbooks, The French Market: More Recipes from My French Kitchen. I picked the book up randomly one summer in a local bookshop, and it quickly became one of my favorites. The recipes are filled with fresh ingredients inspired by the French countryside. These aren’t fussy classical French dishes that you’d find in a 5-Star restaurant – they’re simple to throw together and have a casual, family style to them. They’re also, for the most part, easy to adapt to fit into a healthy lifestyle.

In this recipe, duck legs and thighs are seasoned with orange zest and then cooked until the skin is perfectly crisp and the meat is juicy and succulent. The duck is served over a simple salad made from wilted carrot, fennel, celery, and red pepper. The dish is bright and citrusy, slightly spicy and smokey, and definitely a step up from chicken. I made rice for Shawn, but personally skipped it in favor of a second helping of the salad.

The trick to cooking duck without ending up with a greasy mess is to cut a deep crosshatch pattern into the skin – it will take a little effort, but try to get all the way down to the meat. Ducks carry a thick layer of fat under their skin to act as insulation against the cold water. If this fat isn’t properly cooked off, the duck can be fatty and greasy. Cutting into the skin allows the fat a way to escape. As the duck heats up, the fat will melt and seep through the cuts and into the pan. By the time the meat is coked through, there will be very little fat left on the duck itself. (As an added bonus, all of the rendered fat will have the effect of deep frying the duck, resulting in deliriously crispy skin!)

Disclosure: This post contains Amazon affiliate links. If you make a purchase through them, I will earn a very small commission.