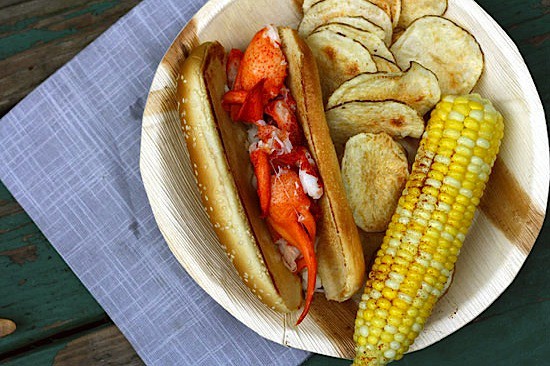 Until last week, I never saw the appeal of lobster rolls. I know that they’re incredibly popular and even pop up at some fast food restaurants during the summer months, but the thought of loading up perfectly good lobster with globs of mayo and celery just seemed wrong to me. But then last weekend at the Food Truck Drive-In, something caught my eye. Along with “regular” lobster rolls, one vendor was selling what they called a Connecticut-Style Lobster Roll that was simply lobster and melted butter. I had never heard of such a thing before! I was already full from the other trucks so I didn’t get to sample their version, but the idea has been with me all week.

I wasn’t sure if the dish was a real thing or something they made up, so I did what any self respecting food blogger would do: I googled it. Apparently it is real, and boy have I been missing out! From what I gather, the mayo-laden lobster roll that I’m familiar with is actually a Maine-style roll or a lobster salad roll. It makes me wish that I had inspected the many booths hawking lobster rolls at the Taste of Hartford a little closer. 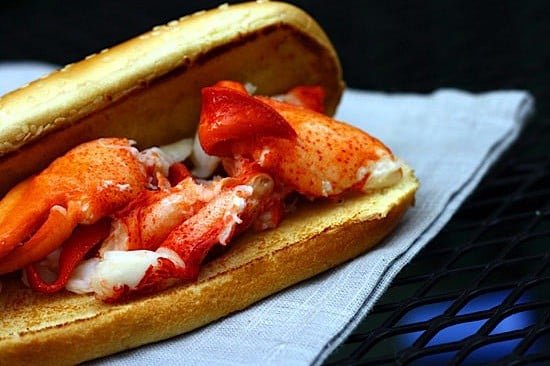 There seems to be a bit of a feud about which type of roll is better, and many people seem to complain that the butter of the Connecticut style roll turns the bun into a soggy mess before you can finish eating the sandwich. I figured that problem should be easy enough to solve by toasting the bun and using less butter on the lobster itself — which also has the added benefit of producing a lighter sandwich with less grease. I definitely didn’t have any issues with sogginess — instead I had a delicious sandwich bursting with the sweet flavor of lobster. There was just enough butter to highlight to lobster’s richness, and the toasty edges on the bun added a little texture to a sandwich that would have otherwise been too soft and squishy for my liking.

Served with corn on the cob (sprinkled with Old Bay seasoning) and baked salt and vinegar chips (I love the Kettle brand)—, this was the perfect summer meal.

I didn’t feel like dealing with actual lobsters, so I bought a container of frozen meat. Having done that, I wouldn’t have it any other way. $12 got me more than enough beautiful chunks of lobster — mostly whole claws — for two generous sandwiches. It also meant that the whole dinner could be made in under 10 minutes.

Connecticut Style Lobster Roll
If you really want to be traditional, you should serve this butter-drenched lobster roll on New England style buns — the kind with the cut away sides tat look like white bread. I had these Nature’s Pride rolls at home already though and they were perfectly tasty too (the rolls were sent to me to sample as part of the Foodbuzz tastemaker program).

Drain the lobster and pat dry.

Spread the insides of the hot dog buns with 1 tsp butter. Heat a large frying pan over high heat. Add the buns to the pan, buttered side down, and cook for 2-3 minutes until the butter has browned and the inside of the roll has gotten slightly crispy. Remove the buns for the pan and set aside.

Reduce the heat to medium-low and melt remaining butter in the same pan. Add the lobster and cook gently until just heated through — it shouldn’t be much warmer than room temperature. Toss well with any butter that remains in the pan. Divide the lobster between the rolls.