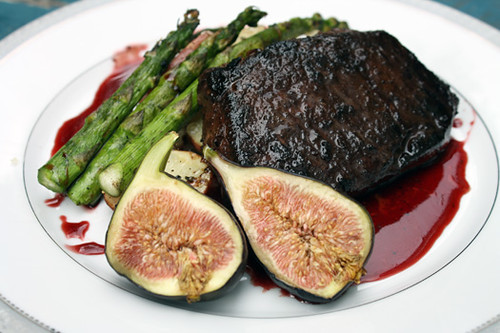 The inspiration for this meal came from all over the place: an episode of Iron Chef, a chocolate cake, a fridge full of Pom, bad cheese that forced me to repurpose my figs…. I honestly wasn’t sure how this would come together until it was on the plate, but it was wonderful. The flavors were very earthy and the sweetness of the cocoa and fig was balanced against the tartness of the pomegranate and coffee. I originally thought the sauce might seem like an afterthought, but it really brought everything together. It was also delicious on the potatoes that I served this with! There’s really not much more to say than that. 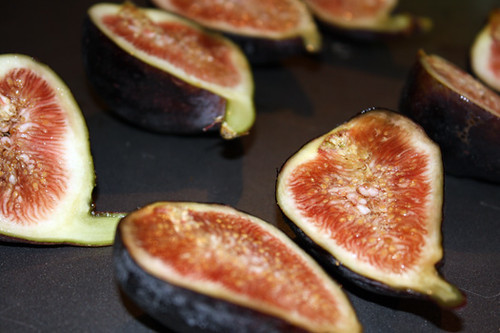 Fresh figs are pretty much my favorite food on earth, and I was so excited to see them at the grocery store. They weren’t labeled, but I grabbed a bunch anyway. Bad idea. They were expensive!! Worth every cent though. I roasted extra and I’m going to have them for breakfast tomorrow with greek yogurt. I can’t wait!

I originally wanted to use filet in this dish, but it was $20 a pound and I didn’t want to spend that much. Bison was half that price! If you haven’t tried it, bison is a great “intro” to game meats – the flavor isn’t very strong and its fairly easy to find in the grocery store. It’s also very lean and high in protein – each steak I used had only 2.5 grams of fat! Definitely a healthy option when it comes to red meat. 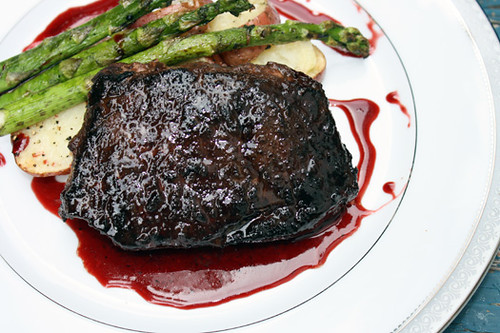 Meanwhile, heat oven to 400. Cut figs in half and drizzle with honey. Roast 5 minutes or until tender and bursting with juice. Remove from oven and set aside.

Combine juice and sugar in a saucepan. Bring to a boil, then reduce heat. Simmer for 20 minutes or until reduced by about 3/4. Remove from heat – the liquid will become thick and syrupy.

Melt butter in a skillet over medium heat. When butter begin to foam, add steaks. Cook 5-7 minutes on each side, or until cooked to medium rare.