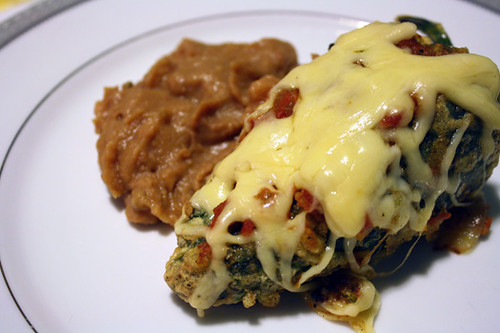 Rick Bayless is probably my all-time favorite celebrity chef. I started watching him on PBS way before he won the James Beard award or was catapulted into stardom by a hearty endorsement from Barrack Obama.  But after all these years of drooling front if my tv, I only tried making one of his recipes for the first time a few weeks ago. I attempted his duck tacos and to my disappointment, they were a huge flop. (To Rick’s credit I’m pretty sure the failure was my fault for substituting duck breast for roast duck. And the accompanying tomatillo and avocado salsa may be one of the most delicious salsas I’ve ever made.)

I didn’t want to give up on him though, so I decided to try out a more traditional recipe. I decided that I wanted to make chile rellenos, and that I wanted to find a Bayless recipe for them. Not easy!! It took some digging, but I eventually found a recipe on his web site that I could work with. I did end up changing it quite a bit – the filling is completely different, I used less batter, made a thicker sauce instead of a broth, and topped them with cheese. But the general idea is his. Sort of. If nothing else, they’re delicious and are everything that I had always hoped a Bayless dish would be.

I’m filing this recipe under “weekend meals” because it does take longer than most of my recipes. The pork filling can be made in advance and frozen, which will save you some time. If you can’t find poblanos, substitute any other large, mild chile. 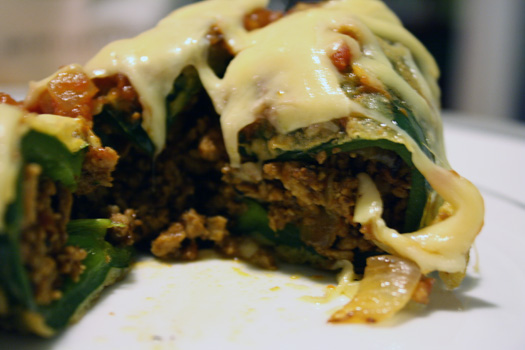 To prepare the sauce: Puree the tomatoes with the juices until smooth. Melt butter in a medium saucepan. Sautee onions until soft. Add pureed tomatoes and cinnamon. Bring to a boil, then reduce heat and let simmer for 20 minutes or until a thick sauce forms. Set aside.

To prepare filling: Pulse pork in food processor until it is coarsely ground. Add to a large skillet and cook until browned. Drain fat. Add 1 cup of tomato sauce and vinegar. Simmer  about 10 minutes.

Heat oil for frying in a deep skillet. Fry chiles until blistered all over – about 1 minute. Remove and allow to drain on paper towels. When cool enough to handle, rub off the pepper skins. The cut a vertical slit in each pepper, starting about 1/2″ from the top and ending about 1/2″ for the bottom. Reach in a remove seeds, the gently rinse the inside of the pepper (try not to tear the incision while you do this).

Beat the egg white with a little salt until stiff. Stir in beaten egg yolk and 2 Tbs flour to form a batter. Spread remaining flour in a dish.

Heat oven to 400. Spoon the pork filling into each pepper. Roll each pepper in flour, then dunk in egg mixture. Fry in hot oil about4 minutes, or until golden.Transfer peppers to a baking dish. Bake for 10 minutes Top with sauce and cheese and bake until cheese melts – about an additional 5 minutes.

Combine broth, chili, and cheeries in a microwave safe dish. Heat for about 2 minute, until the cherries plump up. Transfer to food processor. Add next 6 ingredients (through gralic) and process until smooth. Reserve 1/2 cup. Slather the rest all over the pork. Let pork marinate for at least 1 hour. Place pork on broiler pan and cook at 450 for about 30 minutes. Drizzle with reserved puree.