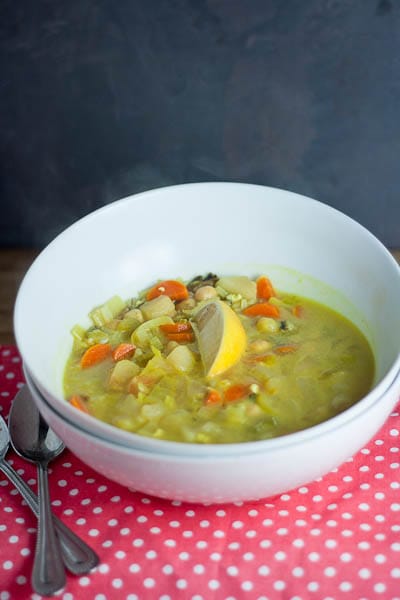 I finished reading Amy Kalafa’s book, Lunch Wars, a few days ago. The book is about improving the food served in school cafeterias, and it was impossible not to think about my own school lunches as I read. In elementary school, I always felt bad for the kids who had to eat the hot lunch, which was absolutely disgusting.

I remember one time I forgot my lunch and had to get the spaghetti. It was mushy and tasted like can. I sat there and cried, refusing to eat any more after the bite. Back in those days, at least in my school, there weren’t a lot of options in the cafeteria. You got whatever the lunch that day was and, if you were lucky and had an extra quarter, maybe you’d get an ice cream sandwich.

But by high school, things changed. There were nachos. And pints of Ben and Jerry’s ice cream (Yes, pints. I don’t know what they were thinking!) One year, a local pizzeria ran the kitchen and the only food available was pizza. Every day. Seriously? With the exception of the pizza year, I have no idea if there was a traditional hot lunch option. If there was, no one ever got it. Why would they? The junk food was good, and that spaghetti was nasty. 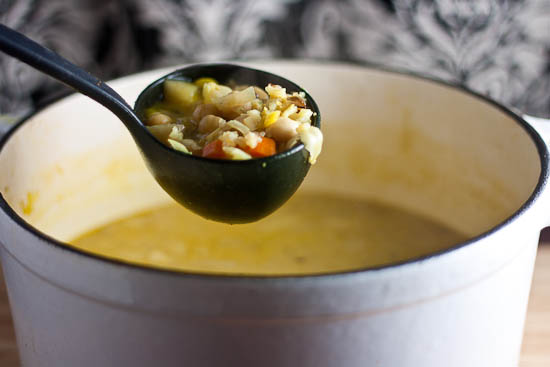 So I had high hopes for this book, which was described as a guide to improving school food and “winning the battle for our children’s health.” Well, I really wasn’t a fan. I almost stopped reading midway through the first (seemingly never ending) chapter.

To me, Kalafa just seemed like a pissed off mom that found out her daughter was throwing out her packed lunches and buying candy instead. She spouted off facts with no footnotes or credentials and, in at least one case that I happen to have personal experience with, either deliberately exaggerated or got her facts wrong. At one point she complained that cafeterias should only serve organic chicken. I literally laughed out loud. Who did she expect to pay for that? I hear at least one person a day complain about their taxes; I don’t think I’ve ever heard anyone complain about the lack of organic chicken in their kid’s cafeteria. Would it be nice? Yes. Is it realistic? No. She does concede that eventually, but I think it was in chapter 3.

Honestly, I think the book would be better if she deleted the whole first chapter. If you’re reading the book, chances are you don’t need to be sold on the idea of improving school lunches. She oversold, to the point of making me think she was a little nuts. The overly political tone really turned me off (and I like politics!).

The book did get better, and I’m glad I stuck with it. It wasn’t much of a guide (her advice can be summed up by two words: be involved) there were a lot of interesting stories and anecdotes. I liked reading about what some school districts are doing – from having students tend a garden and grow fresh vegetables to be used in the cafeteria, to joining forces with local farmers, to the school chef who made and sold soup at the local farmer’s market to raise money for better ingredients. It gave me hope that things can improve, at least in the wealthy districts that she mainly wrote about. Honestly, this book was ok and parts of it were enjoyable, but I personally wouldn’t recommend it. Want to see how you can really make a difference in school lunches? Go read Kim’s blog,The Yummy Mummy. Or watch the next season of Food Revolution. Visit your kid’s cafeteria and get involved. At the very least, pack them healthy homemade lunches that are fun enough for them to actually want to eat. 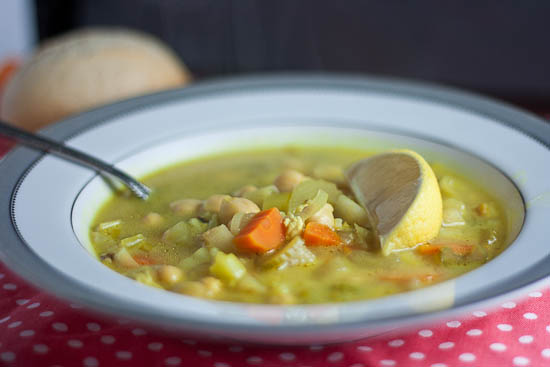 I was lucky when I was growing up – my mom always nt me off to school with an awesome lunch tucked inside my strawberry shortcake lunchbox. I never really liked sandwiches (I still don’t. Crazy, I know.) but she always came up with creative ideas that kept me happy. Wraps were always a popular choice, as was cheese and crackers. Sometimes I brought cereal and bought milk in the cafeteria. My favorite – especially in the cold winter months – was to bring a thermos full of soup. Even today, soup is one of my favorite lunches to pack myself to eat at work. This one is even better the next day, after the flavors have had a chance to mellow out and meld together. It’s buttery smooth and sweet, with a great nuttiness from the brown rice. Pack it up in a thermos or a mason jar (the next best way I’ve found to transport soup without spills). It sure beats canned spaghetti!

Mulligatawny is a creamy Anglo-Indian soup flavored with chicken and curry. This version, with chickpeas, wild rice, and coconut milk, puts a new spin on the traditional soup. If you prefer a vegetarian soup, swap the chicken stock for vegetable stock.

This was a paid review for BlogHer Book Club but the opinions expressed are my own.