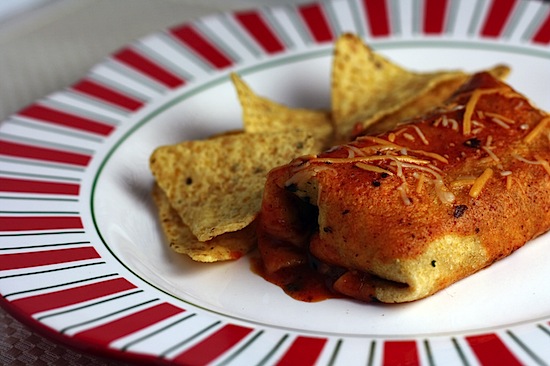 For almost the entire time that I was away, I had a horrible craving for Mexican food. So I wasted no time when I got home and made these enchiladas right away! I was kind of tired of beef and pork, and I don’t care for chicken enchiladas, so I decided to go with a vegetarian option. Shawn recently ordered spinach and cheese enchiladas at a restaurant, so I used those as my inspiration. They don’t taste overly spinach-y, but the vegetables add bulk to the filling so that you can use less cheese and keep the calorie and fat count down (don’t worry, there’s still plenty of ooey, gooey cheese!). 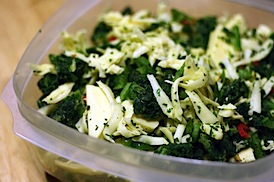 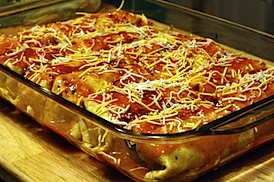 I attempted to find a recipe for spinach and cheese enchiladas online, but none of them looked very good – they all had weird ingredients like ricotta cheese! Nothing that I found was even close to what i was looking for, so I made my recipe up as I went along. I shredded the cheese for my filling and mixed it with the spinach so that you wouldn’t end up with big clumps of either. I also added a poblano pepper and a chili pepper to add a little bit of heat. The poblano gave the whole dish a nice, authentic Mexican flavor and I’ll definitely use them again the next time I make these.
I used Good Food Mexican red sauce, which I liked a lot, on these enchiladas. It caught my eye at the store because it had fewer ingredients than the enchilada sauces an the ingredients were recognizable. It also had significantly less calories and sodium than the other sauce options. The fact the the sauce was made by Good Housekeeping had me a little worried, but I shouldn’t have been. It was great! I liked that it had a little bit of a kick to it, and the smell was incredible. I can’t wait to try the other flavors. [….]

One thing I love about risotto is that just about anything tastes good in it, so it can be very seasonal. I used some nice spring asparagus and ramps in this. Unfortunately, I can never find a good selection of mushrooms here so I didn’t have many options. The dried porcinis were perfect though- they added a nice heartiness to the dish, and I used some of the broth from rehydrating them to flavor the rice.