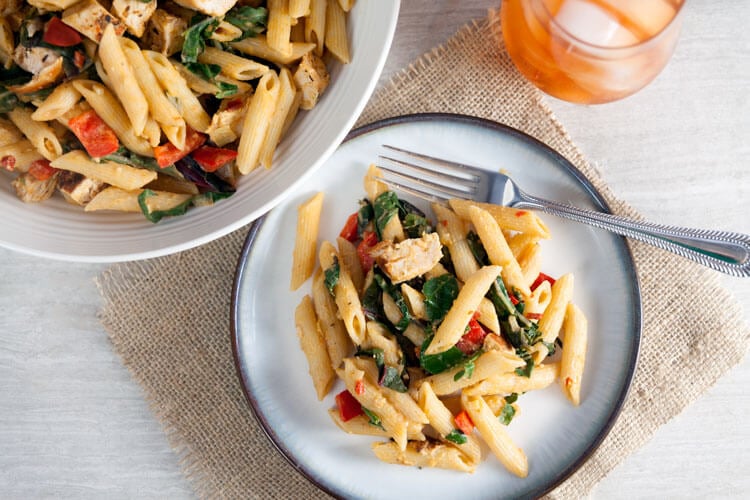 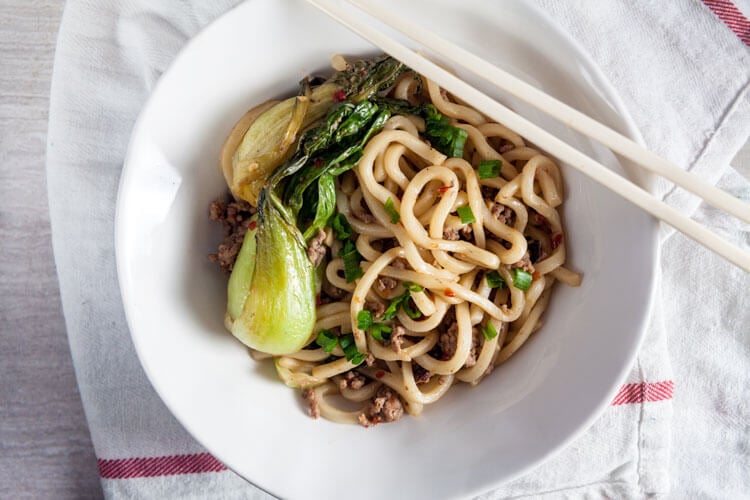 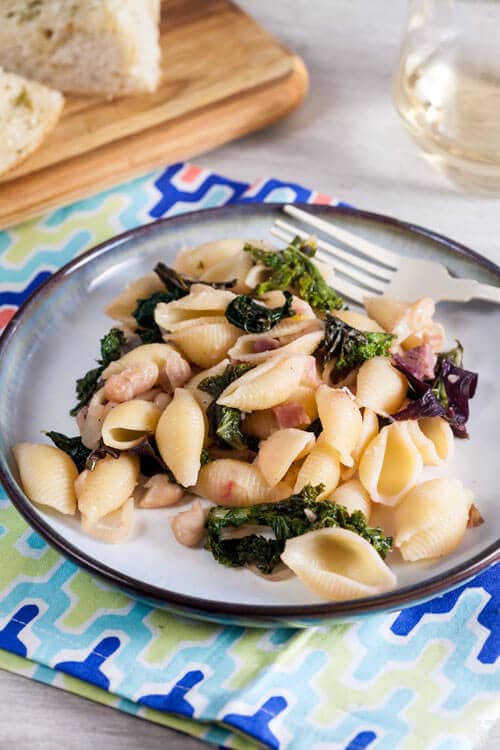 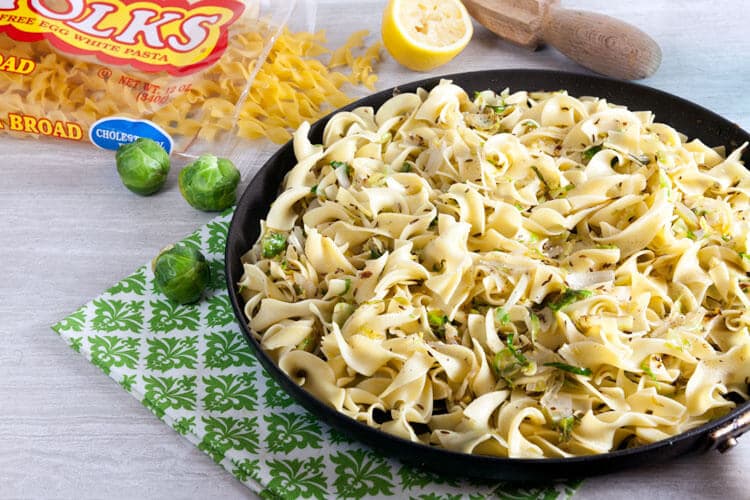 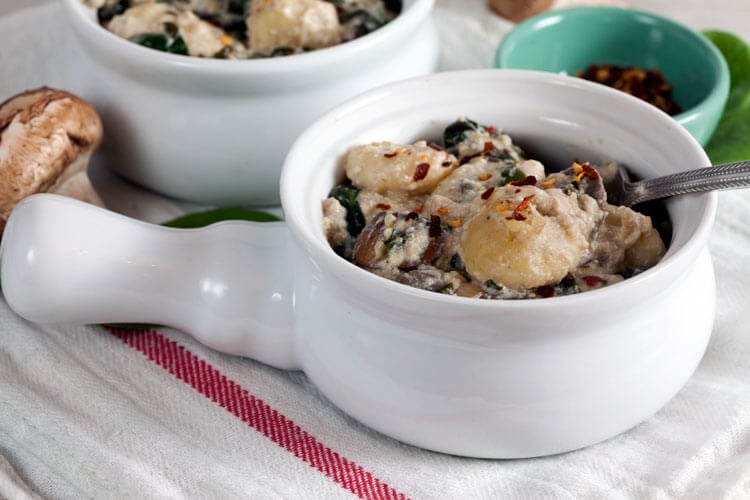 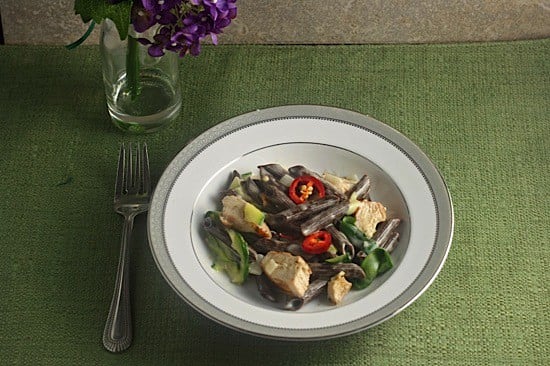 Chocolate pasta. Cream sauce. Chile peppers. Sound Good? What if I told you this fabulous meal would set you back a mere 350 calories and a half our in the kitchen?

A few weeks ago I spent some time wandering around Boston, where I stumbled upon Hotel Chocolat.  As the name would imply, this adorable little shop sold delicious (and very expensive) chocolates. I almost made it out empty-handed. Almost. As I was on my way out, I caught something out of the corner of my eye: cocoa pasta. At first I thought it was just chocolate in the shape of pasta, but then I realized it was actually pasta that contained cocoa powder. There was obviously no way I was leaving without some of that!

I almost immediately decided that I wanted to pair the pasta with a cream sauce. If you’re cooking chocolate pasta you go big or go home, right? I was afraid of it being too rich though, so I used a lightened-up version of cream sauce. I added some chile peppers to the sauce for good measure and to help cut through the richness, then tossed it all together with some zucchini ribbons and grilled chicken. The final dish as every bit as delicious as it sounds and is definitely worthy of being on a menu somewhere. 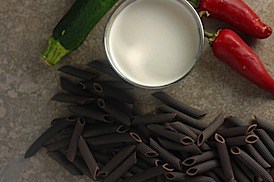 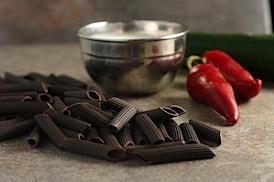 The flavor of the pasta itself was really interesting. There isn’t any sugar in it, so it isn’t sweet like you might expect it to be – it’s just normal semolina pasta with added cocoa powder. Once it’s cooked it has an intense chocolate aroma, but the flavor isn’t overpowering at all. It’s subtle yet complex, like a good mole sauce might be. The dried pasta can be purchased through the link above, but google also returns a few recipes if you want to make the pasta yourself (this one looks simple enough – avoid any dessert pastas that call for sugar).

Because I replaced much of the cream in the sauce with skim milk, it takes a little longer than normal to thicken. Be patient though – it will get there! The sauce is done when it’s thick enough to coat the back of a spoon and hold a line drawn across it with your finger. [….] 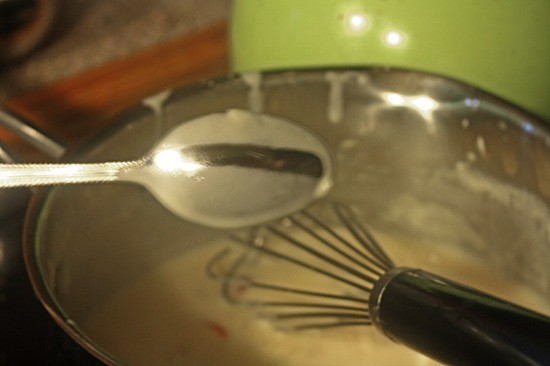 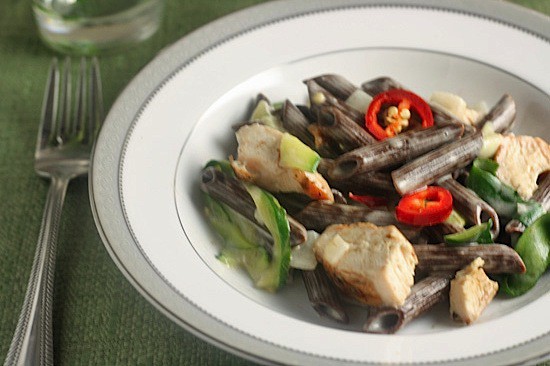