Has anyone else noticed that peaches have been fantastic this summer? Their sweet smell has completely overtaken the produce section of my local grocery store, and I find myself filling my basket with them every week — they’re soft and juicy and perfect. I’d almost go as far as to say that the great peach season makes up for the less than stellar showing that strawberries had earlier this year.

Needless to say, when General Mills asked me to develop a recipe that would “make something good, better” using Land O’Lakes’ new Cinnamon Sugar Butter Spread, it didn’t take me long to decide on a creation that featured fresh peaches. At first I considered making a peach cobbler, a staple of summertime cookouts and a dish that’s perfect for sharing with friends, but then I thought that if there’s anything better than peach cobbler, it’s peach cobbler that you can eat for breakfast. These fluffy whole wheat pancakes layered with stewed cinnamon sugar peaches capture all the flavor of the favorite summertime dessert and repackage it as perfect breakfast treat. 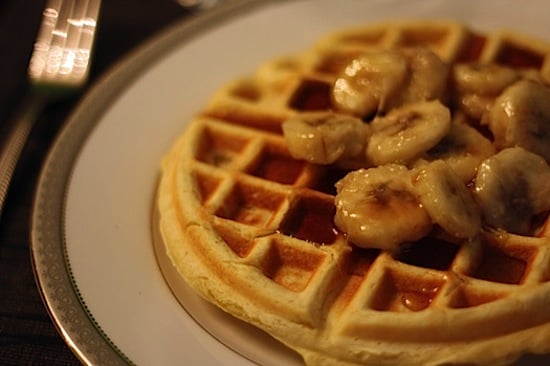 Now that that’s out of the way, let’s talk toppings. Syrup is a classic, but I don’t like to use too much since it can be so sweet. For these, I used just a drizzle of real maple syrup and some bananas that I sauteed with a little bit of grand marnier. The creaminess of the bananas was a really nice contrast to the tender-crisp texture of the waffle itself. As another alternative, I really like these waffles topped with a little bit of raspberry preserves. [….]