Shawn’s first reaction to these bean and chorizo stuffed peppers was, “wow, these are really cheesy!” Surprisingly, there’s actually not that much cheese in them at all. Just like the sweet potato enchiladas I posted a few weeks ago, it’s all the magic of refried beans.

Refried beans are great on their own as a side dish, but their creamy texture also makes them perfect for making a little melted cheese go a long way. You can’t tell where the cheese ends and the beans start!

For these peppers, inspired by jalapeno poppers, I mixed beans with cream cheese, sharp cheddar, and chicken chorizo. The filling would actually be great as a dip, but it’s pretty phenomenal when you bake it inside poblano or jalapeno peppers. Top them off with a pinch of extra cheese and some crispy, toasted breadcrumbs for a treat that everyone will gobble up. 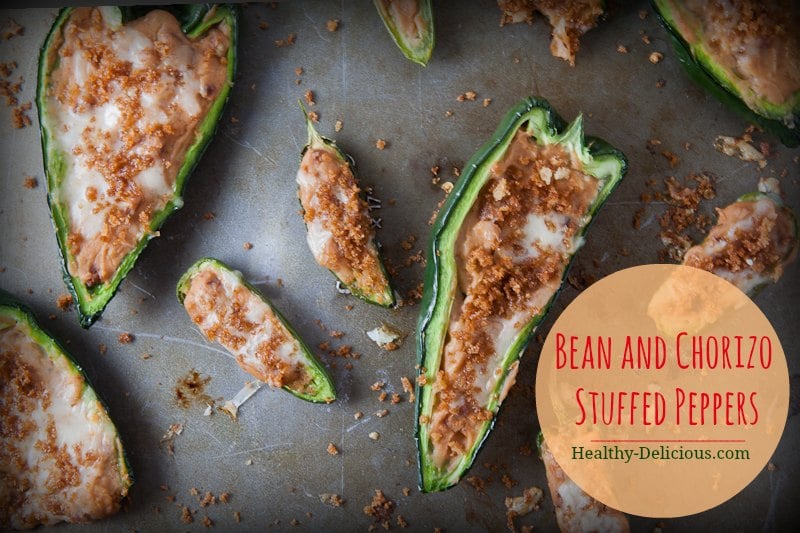 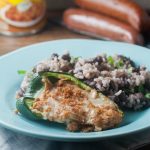 For an appetizer version of this recipe, substitute the poblano peppers for about 16 jalapenos; follow the rest of the directions as written. Or do what I did and make some of each! The poblanos have a mild, slightly smokey flavor; the jalapenos are spicier.
No ratings yet
Print Pin Rate
Prep Time: 10 minutes
Cook Time: 30 minutes
Total Time: 40 minutes
Servings: 6
Calories: 1426kcal
Prevent your screen from going dark

Nutrition Facts
Bean and Chorizo Stuffed Peppers
Amount Per Serving (1 g)
Calories 1426 Calories from Fat 954
% Daily Value*
Fat 106g163%
Saturated Fat 39g244%
Cholesterol 218mg73%
Sodium 1922mg84%
Carbohydrates 75g25%
Sugar 3g3%
Protein 62g124%
* Percent Daily Values are based on a 2000 calorie diet.
This post was brought to you in partnership with Old El Paso/General Mills. The recipe for Bean and Chorizo Stuffed Peppers and all opinions are my own. Always have been, always will be.
Pin
Share
Tweet
Share
824Shares
By Lauren on April 5th, 2013