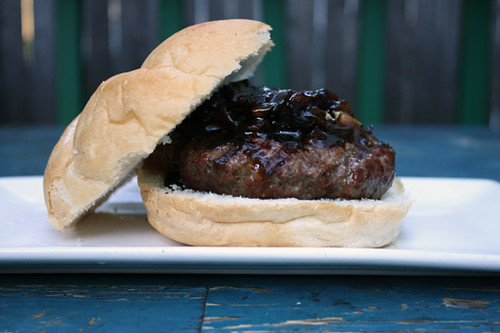 Can you believe that June is almost over already? I can’t! I have no idea where the first half of the year disappeared to! The Fourth of July is right around the corner and it took me by surprise – I’m totally unprepared for it! Just in case you are too, I’m doing my 4th of July post early. That way if you get inspired by it, you’ll still have time to go out and get the ingredients. 😉

Since no July 4th is complete without a backyard BBQ, here are two easy and delicious ideas that are a little more special than the normal hot dogs and hamburgers. They’re not as healthy as the things I normally post, but it is a holiday…. 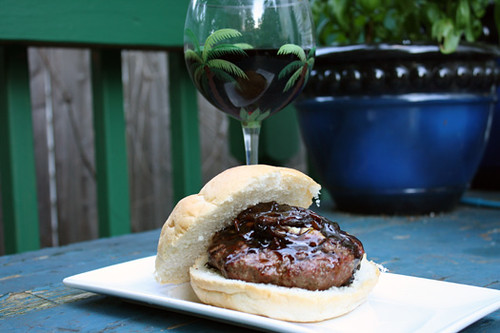 First up we have a burger stuffed with Roquefort and topped with onion jam. Since you’re stuffing the burger with cheese, you can get away with using meat that’s a little leaner than you normally would for a burger. The cheese melts inside and keeps it from drying out.  Delicious. I tried to get a picture of the cheese oozing out of the center, but it didn’t come out very nicely so I’ll spare you.

A good trick to making burgers is to make a small indentation in the center- shape the raw meat almost like a red blood cell. That way, when the center puffs up as it cooks it won’t pull the sides in. You’re burger won’t shrink! Using this trick, its easy to make your burger the same size as the bun and avoid having to eat mouths full of plain bread. 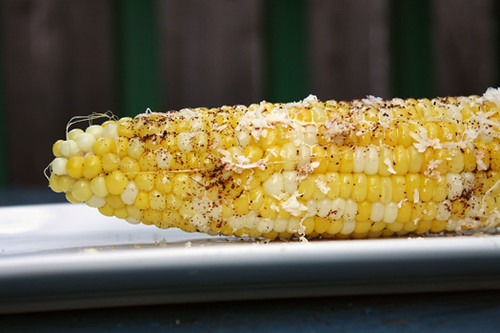 One of my other backyard favorites is Mexican style corn on the cob. Doesn’t that look awesome? I stole this idea from a local taco restaurant, but it’s a really simple way to dress up your corn. Grill it in the husks (about 15 minutes should be long enough) then sprinkle with some chili powder and about 1 tsp of grated cotija cheese – just enough to add some delicious flavor, but not enough to actually taste spicy or cheesy. If you want something more adventurous, you can also try my buffalo street corn.

13 thoughts on “4th of July Treats: Roquefurt Burger with Onion Jam, Mexican-Style Corn on the Cob”